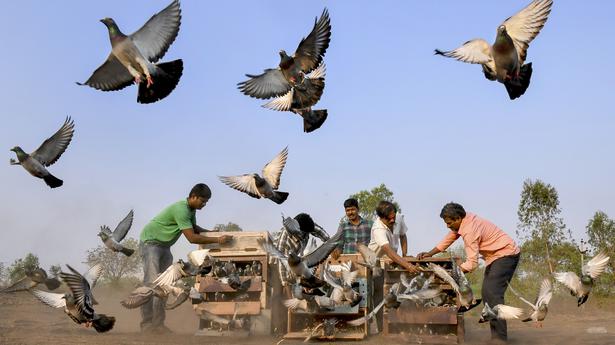 It is a smoggy April morning in Signature Bridge, Delhi. Three men unshackle 26 trained homing pigeons kept in two rectangular cages on an empty ground. Two more men hold a banner that says Karnataka Homing Pigeon Federation in English and Kannada. As both the cages are simultaneously opened, the birds slowly walk out, flap their wings hard, and take off. From this starting point, where they have never been before, they need to find their way back to their respective lofts, over 1,500 kilometres away. Once they reach their destinations, the distance and velocity of the birds are measured to determine the winner of the race.

Among the participants is Red Rocket, a three-year-old grey-headed pigeon with a white-and-brown plume. Like his competitors, he, too, bears a red seal on his wings and two rubber bands on his legs with concealed numbers for identification. After nine days of flight, on April 24, 2022, the pigeon reaches his loft at the terrace of Shanker V’s residence in Hennur Gardens, Bengaluru. Shanker, a pigeon fancier, immediately removes the bands from his bird’s legs to reveal the identification number. He then clicks a photo and WhatsApps it to the organisers, who, after verifying the numbers, measure the distance the pigeon has covered and the velocity of its flight.

Red Rocket, they announce, has flown 1,741 kilometres at 251 metres per minute, making him the winner. The pigeon had never been this far from his nest. Yet, quite amazingly, he does what he always has: find his way back home.

This extraordinary capability is a result of magnetoreception, wherein animals and birds orient and navigate using the earth’s magnetic field. At one point, humans selectively bred pigeons for their extraordinary ability to find their way home over long distances. This led to the creation of a breed of homing pigeons, which was used for communication and later racing.

Many Indian cities have thriving, active pigeon racing fraternities. Chennai, today, is considered the country’s capital for pigeon racing. According to K Palaniappan, the founder of the 38-year-old New Madras Racing Pigeon Association, the city has about 5,000 fanciers, out of which at least 1,000 are into racing. Among them is popular filmmaker Vetrimaaran, who has participated in international competitions like the One Loft Race.

The pastime has been popular for over 50 years, due to the efforts of the early fanciers, says Palaniappan. “Fanciers like Boldry, Jimmy Diaz, and Pat Casey imported breeds like Strassert, Paulsion, Logans, and Catrysse from different parts of the world,” he adds.

Bengaluru is not far behind. Y Suresh, the current president of KRPC, estimates that there are over 800 fanciers in the city, although there is no official count.  Hyderabad and Pune are the other cities in the country that have at least 100 fanciers. The numerous associations and clubs are scattered across different cities and are not unified under a national body. So, the races are organised independently. The racing season in India usually begins in December and goes on till April. The rest of the year is used for resting, breeding, and training.

“Calcutta has a rich history of pigeon racing. The pigeons in the military service during the Second World War were bred and used for racing,” says Sonjoy Dos, a 60-year-old fancier and a member of CRPC. “The popularity in the city is declining though. We now have just two clubs and about 50 fanciers.”

Unlike conventional pigeon races, wherein the finishing points differ, One Loft Races have the same starting and finishing points. Pigeons, typically less than six weeks old, belonging to different fanciers, are taken to the special loft to be used for the event before they can fly. The birds, then, slowly learn to fly and recognise this loft as their home. The training, food, and conditions are the same for all the birds. With the usage of electronic timing systems, the winners of One Loft Races are decided by as little as 100th of a second.

Racing pigeons, when they are just a few days old, are made to wear a permanent ring with a four-digit number around one of their legs. This ring will also have the bird’s birth year and the club it belongs to.

Ahead of the race, which ranges from 100 kilometres to about 2,000 kilometres, pigeons are made to wear a rubber band with numbers imprinted on both sides. The number on the inside will be known only to the organisers.

Once the bird reaches its loft, its fancier removes the band and conveys the number inside to the organisers. After verifying the number, the organisers calculate its distance (in kilometres) and its velocity (in metres per minute).

More recently, Radio Frequency Identification (RFID) is being used, especially abroad, for more accurate measurements. In this method, an electronic chip is attached to the bird and a corresponding electronic clock with antennas at the loft automatically registers the relevant information.

Pigeons have played a nonapparent yet crucial role in shaping human history from the skies.

From the conquests of Genghis Khan in the 1200s to the Revolutions of 1848, pigeons were important agents of communication. In the 1850s, Paul Reuters, the founder of Reuters news agency, used a fleet of over 45 pigeons to deliver news and stock prices between Brussels and Aachen. During the destructive 1999 cyclone in Odisha, when other forms of communication were unusable, the police extensively used its pigeon service to relay information. Indian National Trust for Arts and Cultural Heritage, as recently as 2018, conducted a ceremonial flight of these pigeons from Bhubaneswar to Cuttack.

According to Encyclopedia Britannica, the modern form of pigeon racing began in Belgium, in 1818, and swiftly spread across Europe and other parts of the world.

In India, pigeons were used for recreational purposes since the Mughal era. The remnants of this history can be found even today in Old Delhi in the form of the kabootarbaz (pigeon keeper).

Five months after Red Rocket’s incredible journey from Delhi to Bengaluru, he rests at his loft with 65 other pigeons. It is difficult to distinguish him from the others. But his fancier, Shanker, has no such problems as he deftly picks up the prize-winning bird and displays him like a proud possession.

Shanker’s fascination for the birds began five decades ago. His mother, one afternoon, rescued a little white pigeon at their terrace in Benson Town, Bengaluru. Shanker, then 12, gave it some water and seeds. A few days later, he released the pigeon. To his surprise, it returned to his house. Shanker was thrilled. He, along with his friend, took the bird a few kilometres away from his house and released it. It returned once again. Next, the boys travelled over 50 kilometres away from home and released the bird from Nandi Hills. By the time they returned, the bird was already back in its nest. Shanker then started getting more pigeons.

Shanker’s love for pigeons grew so much that when he constructed his two-storey house at Hennur Gardens in 2011, a pigeon loft was part of the building plan. Fanciers, who are into racing, see their pigeons not merely as pets; they treat them as athletes. And, making a good athlete requires work. Shanker, who also runs a local cricket and football club, knows this well. When the birds are young, they need training (to identify their nest), vaccination, and care. For two hours every day, he cleans the loft and feeds them a 21-seed mixture, including green gram, brown gram, and peanuts. He spends over a lakh every year for his birds, apart from a lot of time and energy.

Fanciers also need to keep a constant eye on their counterparts’ pigeons for breeding. Shanker, for instance, found his pigeon a mate all the way from Tiruchi.

The return of investment isn’t much in pigeon racing, according to the fanciers. There are no glamorous cash prizes. Winners mostly get certificates and trophies; rarely motorcycles or cars. The fanciers also vehemently deny allegations of betting.

So, if not for the money, why are they in it?

“More than the prizes, more than winning or losing, more than anything, you feel some kind of happiness to see your bird return from a distant land,” says Shanker, “Many kids in my cricket and football clubs, once they find better opportunities, they leave the club. But these pigeons — they always come back to me.”