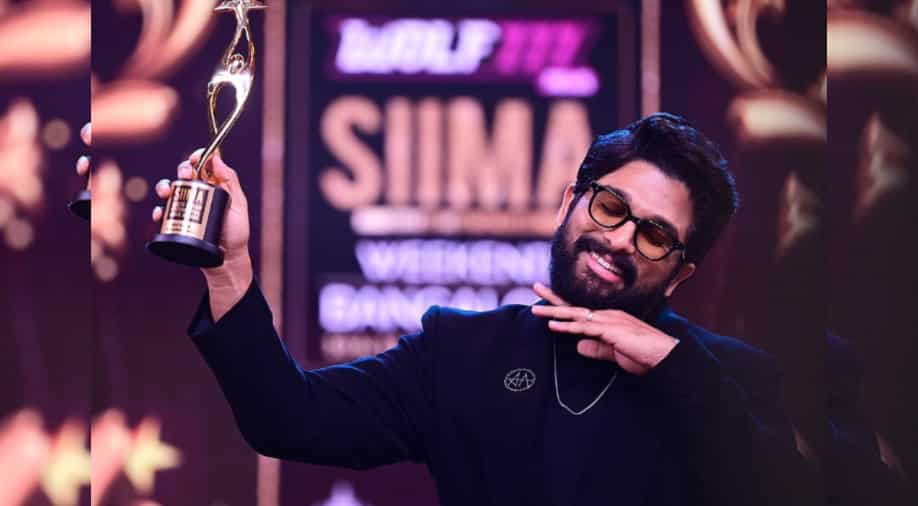 
The world has seen the kind of rage that ‘Pushpa: The Rise’ has created with its release. While the film went on to register its success at the box office all over the world, Allu Arjun’s craze as PushpaRaj from the film among the audience has shown an unprecedented effect which is still visible around the corners. While the film has created some really amazing examples of its success, now it went on to win awards on its name at South Indian International Movie Awards.

South Indian International Movie Awards (SIIMA) rewards the artistic and technical achievements of the South Indian film industry. While the entire south Industry was present at the award ceremony, everyone was eyeing on the winners of Best Film, The Best Director, and The Best Actor category, and Pushpa: The Rise ruled it over.

The film brought the pan India superstar Allu Arjun in never seen-before avatar of PuhspaRaj which went on to create a rage of its own over the boundaries. Allu Arjun won the award for the Best Actor in a Leading Role (Telugu) at Pushpa: The Rise at SIIMA. The actor received the award in his Pushparaj style at the stage.

As the film took over the whole nation with its mind-blowing visuals, dialogues and action sequences, and a lot more, Sukumar as a director deserves all the credit for the same. Sukumar won the award for the best director (Telugu) for Pushpa: The Rise at SIIMA.

Above all, Pushpa: The Rise as a film has set some really unbelievable records at the box office and also ruled the hearts of the millions with its brilliant story, songs, and everything. Pushpa: The Rise won the Best Film (Telugu) Award at SIIMA.

Other than this, Devi Sri Prasad is a man behind creating raging numbers like “Daakko Daakko Meka”, “Srivalli”, “Oo Antava Oo Oo Antava”, “Saami Saami”, and “Eyy Bidda Idhi Naa Adda”. Devi Sri Prasad won the Best Music Director for Pushpa: The Rise at SIIMA followed by the Best Lyrics award to Chandrabose for Srivalli song. And then who can forget the best friends of PushpaRaj, Kesava aka Mondelu. Jagadeesh Prathap Bandari won the Best Actor in a Supporting Role for Pushpa: The Rise.

Moreover, while Pushpa: The Rise is collecting all the love and critical acclamation from the masses, its second part, Pushpa: The Rule has been eagerly awaited by the fans. While the makers are also equally excited to bring the second part of the film to the audience, they have recently updated about the commencement of the shoot with a Pooja ceremony.