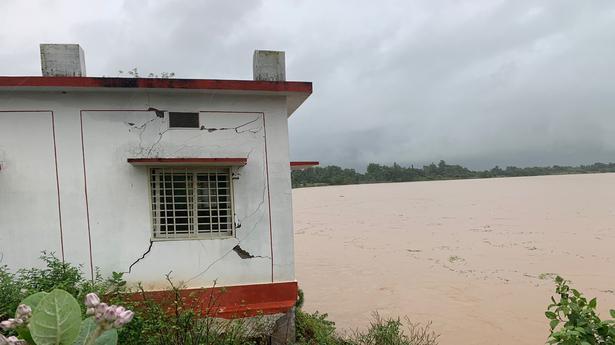 Heavy inflows from catchment areas led to floods in the Nagavali river in Srikakulam district on Saturday. With a little change in the course of the river, many government and private properties were washed away near Kalivaram of Amadalavalasa mandal of the district. Rythu Bharosa Kendram and Wellness Centre were inaundated. Over 100 acres of cashew and mango groves were completely damaged.

The locals alleged that illegal sand mining all along the Nagavali river had turned a bane for them as the river had changed its direction to some extent. Around 25,000 cusecs of water was discharged from Gotta barrage, according to irrigation officials.

Meanwhile, Srikakulam Collector Shrikesh B.Lathkar asked the officials to be alert for the next three days with the forecast of heavy rains. He said that the wind speed might cross 55 km per hour damaging groves and structures. He directed the revenue and irrigation officials to work with coordination and send people living in low-lying areas to safer locations as both Vamsadhara and Nagavali rivers might receive huge inflows till Wednesday.