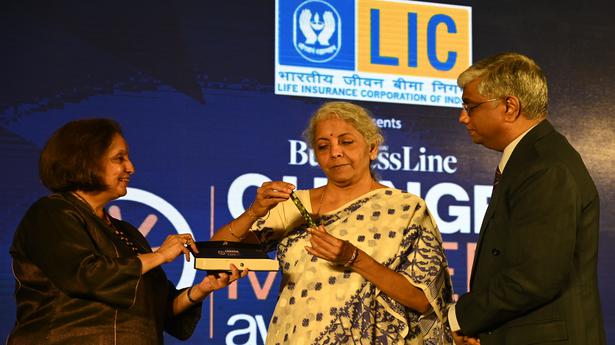 Finance Minister Nirmala Sitharaman on Friday urged people to be more positive about India’s achievements, and described the BusinessLine Changemaker Award winners as examples of inspirational work in areas that need urgent attention.

“All of us should give ourselves that moment of pause to think about what we are doing for our country. Even If you can’t serve it, at least don’t disserve it. At least don’t spread your toxicity,” said the Minister, who was the chief guest at the award ceremony.

“This is a time when we all want to be positive. We want to engage… look at the excellent work these award winners have done. Are we going to forget them tomorrow and say nothing is happening in this country. It’s all happening. So I take this opportunity to showcase not just the achievements of the country, which are there for all of us to see,” she said.

“Your stories are remarkable and very inspirational and I can see a slant of changemakers focusing largely on agriculture and environmental matters. These are the areas we need remarkable changes,” Ms. Sitharaman said after presenting the awards to winners in six different categories.

“The awards are only the first step as they show that solutions are available which need to be encouraged so that they become common place. We need to rapidly change our mindset on how to live, how to consume agriculture products… decades of pesticide usage are showing on our health,” the Minister noted, mooting adequate coverage for the path-breaking work of the award winners going forward.

Malini Parthasarathy, Chairperson of The Hindu Group of Publications, said the fourth edition of the BusinessLine Changemaker Awards intended to recognise “humanly catalysts” who had helped effect dynamic change in our society and economy.

“These awards are unique as unlike other corporate awards which honour corporate excellence or financial success, these are for the real agents of socioeconomic change, whose work on the ground have a transformative impact on the quality of our lives,” she said.

“This is very much in line with our core values as a media group and we pride ourselves on the fact that we are not linked to any business or corporate interests,” she noted, emphasising that this translates into authentic and fact-based reporting and credible narratives in the group’s publications.

Lauding Finance Minister Nirmala Sitharaman’s dynamism and commitment to the regeneration of the Indian economy as inspirational, Ms. Parthasarathy said: “Along with the Prime Minister, Shri Narendra Modi, it is to their credit that India is now ranked as the world’s fifth largest economy.”