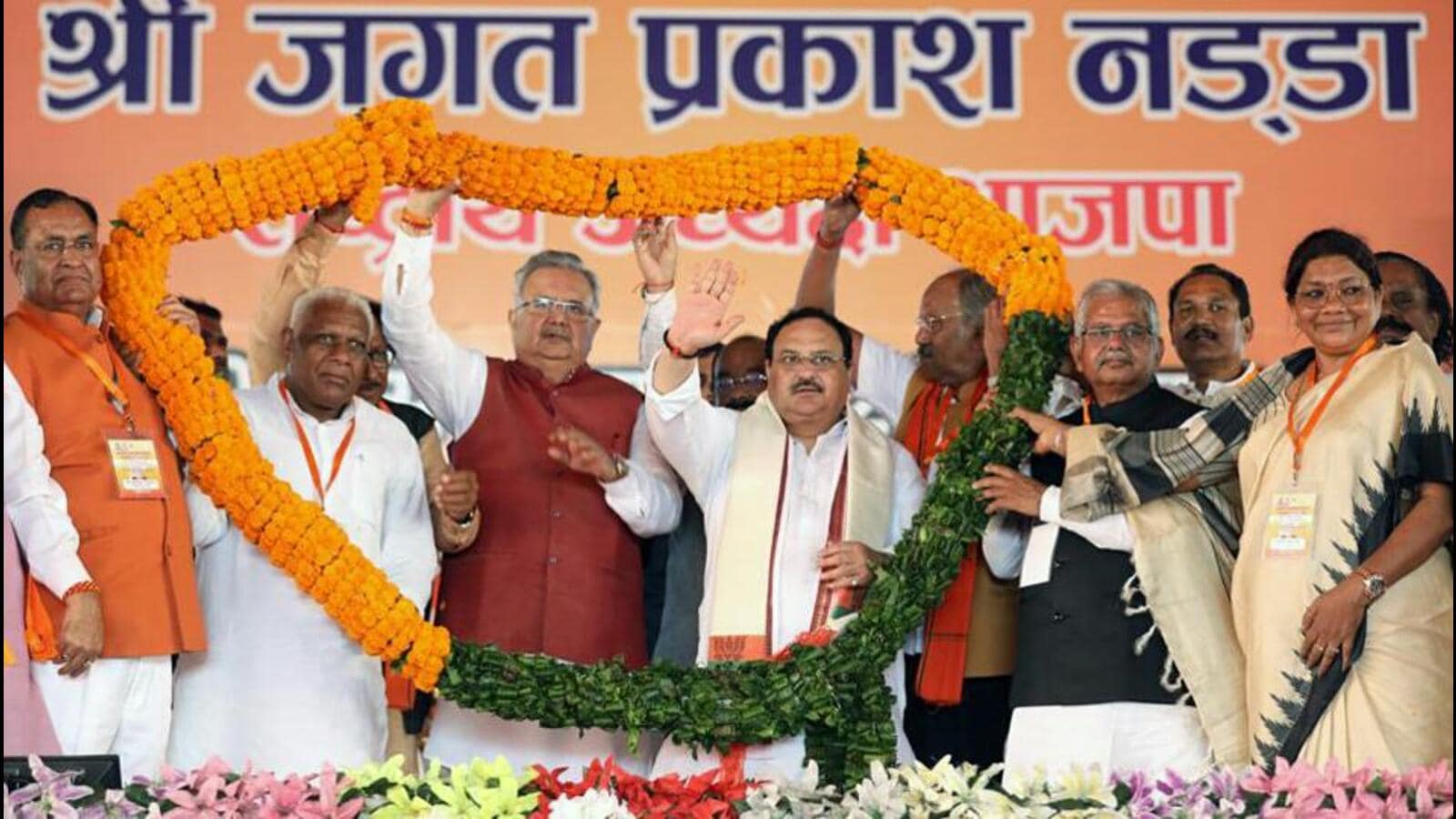 
Bharatiya Janata Party ‘BJP) national president JP Nadda on Friday alleged that the Congress government in Chhattisgarh has stalled several ongoing projects and is now working as the ATM for the Congress party.

Addressing a convention of booth level party workers in Chhattisgarh’s capital Raipur, Nadda also alleged that regional parties are “family parties” and said the BJP will fight against dynasty politics in the country with its ideology.

Nadda, who is on his maiden visit to the Congress ruled state after assuming charge as the BJP chief, appealed party workers to take the messages of Prime Minister Narendra Modi to the booth level and apprise people with the work being done under his leadership.

Nadda added that chief minister Bhupesh Baghel-led Chhattisgarh government has nothing for the people of the state and claimed that the BJP is the only party which has an ideology to serve the people.

“Our fight is against the politics of ‘vanshwad’ (dynasty). Right from Jammu and Kashmir to Tamil Nadu, we are battling against it. In Jammu and Kashmir the fight is against the National Conference (NC) and PDP (Peoples Democratic Party), SAD (Shiromani Akali Dal) in Punjab, Samajwadi Party (SP) in Uttar Pradesh, RJD Rashtriya Janata Dal) in Bihar, BJD (Biju Janata Dal) in Odisha, TMC (Trinamool Congress) in West Bengal which is the party of ‘Aunt-nephew’– Mamta Benerjee and Abhishek. Similarly, the battle is also against (YS) Jagan Mohan Reddy’s party in Andhra Pradesh (YSR Congress), TRS (Telangana Rashtra Samithi) in Telangana and MK Stalin’s party in Tamil Nadu (AIADMK). All these parties are family parties. The Shiv Sena of Uddhav Thackeray broke because of the family..,” Nadda said.

Taking a dig at the Congress over its Bharat Jodo Yatra, he said, “Those who have failed to keep its house in order have launched the Bharat Jodo yatra. You have to understand why those who were associated with you from the last 50 years have quit the party.”

Reacting to Nadda’s speech on Friday, the Congress said that the BJP will never understand the Bharat Jodo yatra as they have always created a “divide” in the country.

“Firstly, I don’t know how Nadda ji has made the ATM remark as the BJP is ruling in 17 states and I guess he is talking about his own party. Secondly, the BJP could never understand anything regarding unity, for us this country is a family and we will unite it through the Bharat Jodo Yatra,” said RP Singh, Congress spokesperson.

BJP leaders claimed that Nadda’s visit to Chhattisgarh is crucial as it comes ahead of the next year’s Assembly polls in the state.

RSS chief Mohan Bhagwat and its ‘sarkaryawah’ (general secretary) Dattatreya Hosabale have already reached Raipur for the coordination meeting to be held from September 10 to 12.

It is for the first time that an all-India coordination meeting of the RSS-linked bodies is being held in Chhattisgarh.