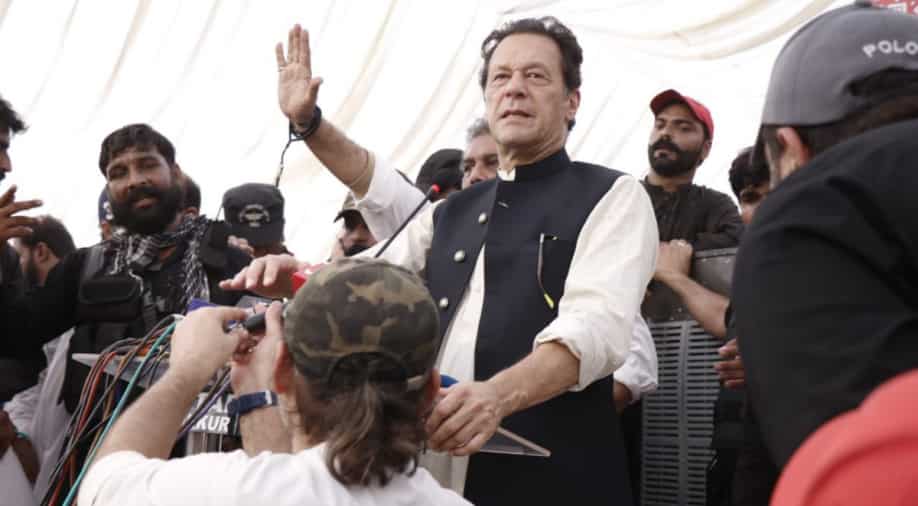 Former Pakistan PM, Imran Khan has landed himself visibly in more trouble and critique following a statement that he made during a political rally on Sunday.

Khan was addressing a rally in Faisalabad where he said the government is stalling elections to bring the army chief of choice, adding that only a free and fair election can ensure political stability in Pakistan and the government is running away from doing so because they want to “install an army chief of their choice in November”, he also said that the current Pakistani dispensation wants to do so because if a “patriotic Army Chief is appointed, he would ask them about their ill-gotten wealth”.

The comments have seen sharp critique on Imran Khan and his choice of words, including that from Pakistani Prime Minister Shehbaz Sharif, Defence Minister Khawaja Asif, Chief Justice of the Islamabad High Court and the military itself.

Pakistan’s Prime Minister Shehbaz Sharif while taking to Twitter said that Khan’s comments were “despicable utterances to malign institutions are touching new levels every day”, adding, “He is now indulging in direct mud-slinging & poisonous allegations against Armed Forces & its leadership. His nefarious agenda is clearly to disrupt & undermine Pakistan.”

Pakistan’s defence Minister Khawaja Mohammad Asif while addressing a press conference in Islamabad said that Imran Khan has become a threat to the country’s security, “Imran Khan made wrong statement about the army chief at the rally. Many army chiefs were appointed in Pakistan. The sanctity of some institutions is for Pakistan’s security, Imran Khan should not play with the country for its own interests”.

The Islamabad High Court Chief Justice, Justice Athar Minallah while hearing a petition regarding the censoring of Imran Khan’s speeches, censured Imran Khan over his COAS appointment remarks asking Imran Khan’s consul to do some self-accountability.

The military statement reiterated the laid out procedure for the appointment of the COAS while expressing displeasure over Khan’s comments said that “Senior politicians trying to stir controversies on appointment of COAS of Pakistan Army, the procedure for which is well defined in the constitution, is most unfortunate and disappointing. Senior leadership of Army has decades long impeccable meritorious service to prove its patriotic and professional credentials beyond any doubt. Politicising the senior leadership of Pakistan Army and scandalising the process of selection of COAS is neither in the interest of the state of Pakistan nor of the institution.”

Khan is yet to come out with a clarification, or rebuttal on his statement made, until the filing of this report.