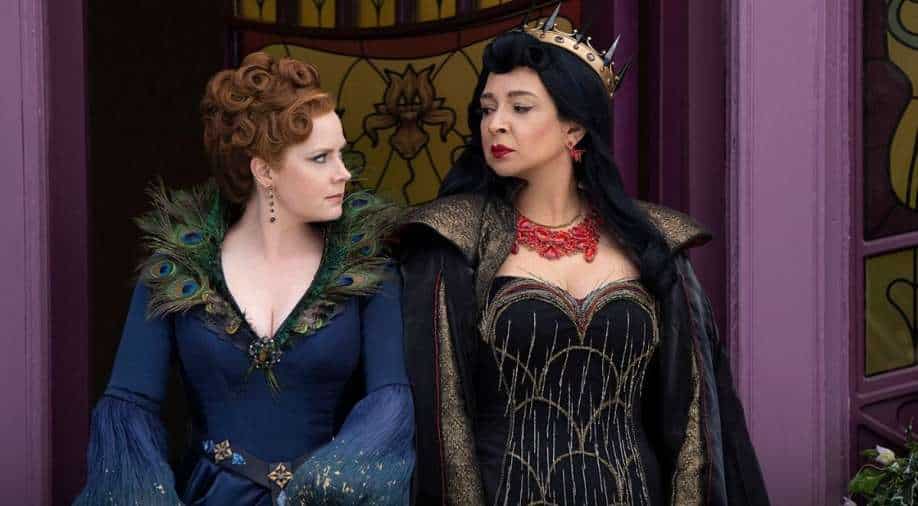 
Amy Adams is stepping into the shoes of Princess Giselle, once again, but this time she is a little wicked and evil. Reprising her role from 2007’s ‘Enchanted’, the Academy Award nominee has turned a little devilish in the film’s sequel and her stepdaughter Morgan (played by Gabriella Baldacchino) is facing the brunt this time.

As can be seen in the trailer, Giselle, who was living a fairytale life with her husband Robert (played by Patrick Dempsey) and stepdaughter, has decided to leave New York City and shift to a castle located near the suburbs with her newborn baby.

When the family moves to the picturesque town of Monroeville, they’re visited by their old friends Nancy (played by Idina Menzel) and Edward (played by James Marsden) from the Kingdom of Andalasia. They also get introduced to the villain of the story, local real estate agent Malvina Monroe (played by Maya Rudolph), along with her two minions Rosaleen (played by Yvette Nicole Brown) and Ruby (played by Jayma Mays).

The eagerly-anticipated sequel to ‘Enchanted’ reunites the original cast members of the film and it also stars Maya Rudolph, Gabriella Baldacchino, Yvette Nicole Brown, and Jayma Mays. It is helmed by Adam Shankman and is all set to premiere exclusively on Disney+ Hotstar on November 24.

The trailer of the Disney film debuted on Friday at the D23 Expo. Check it out below!

The synopsis of the story reads, “It has been 15 years since Giselle (Amy Adams) and Robert (Patrick Dempsey) wed, but Giselle has grown disillusioned with life in the city, so they move their growing family to the sleepy suburban community of Monroeville in search of a more fairy tale life. Unfortunately, it isn’t the quick fix she had hoped for. Suburbia has a whole new set of rules and a local queen bee, Malvina Monroe (Maya Rudolph), who makes Giselle feel more out of place than ever. Frustrated that her happily ever after hasn’t been so easy to find, she turns to the magic of Andalasia for help, accidentally transforming the entire town into a real-life fairy tale and placing her family’s future happiness in jeopardy. Now, Giselle is in a race against time to reverse the spell and determine what happily ever after truly means to her and her family”