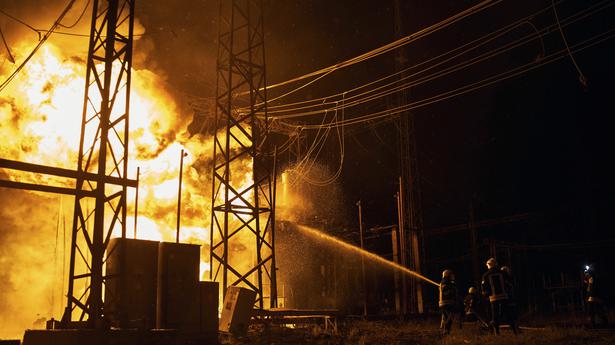 ‘The goal is to deprive people of light and heat,’ Ukraine President says while slamming Russia

‘The goal is to deprive people of light and heat,’ Ukraine President says while slamming Russia

Ukrainian officials in the country’s second city Kharkiv and in the eastern Donetsk and Sumy regions issued statements on social media saying there were blackouts, while AFP journalists in the Donetsk regional city of Kramatorsk meanwhile confirmed the cuts were also impacting one of the largest cities in the east still under Ukrainian control.

“A total blackout in the Kharkiv and Donetsk regions, a partial one in the Zaporizhzhia, Dnipropetrovsk and Sumy regions,” Mr. Zelenskys said in a statement on social media, blaming “Russian terrorists”.

“No military facilities,” he added. “The goal is to deprive people of light and heat.”

The blackouts, which came after Ukrainian forces said they had recaptured dozens of towns and villages in eastern Ukraine, hit regions with pre-war populations of millions of people.

The regional governor of the Kharkiv region, where Ukrainian troops have reported the largest gains, said Russian forces had “struck critical infrastructure” across the region and its main city, also called Kharkiv.

“There is no electricity or water supply in several settlements. Emergency services are working to control fires at the sites that were hit,” Oleg Synegubov said in a statement on social media.

A video on the Nord Stream pipeline
| Video Credit: The Hindu Bureau

The head of the Dnipropetrovsk region Dmytro Reznichenko also said Russian forces were responsible for blackouts across his region.

“Several cities and communities in the Dnipropetrovsk region are without electricity. The Russians hit energy infrastructure. They cannot accept defeat on the battlefield,” he said in a statement online.

The head of the eastern Sumy region meanwhile said the cuts to electricity and water supplies had impacted at least 135 towns and villages.

Kramatorsk governor had also reported cuts across the region, which has been partially controlled by Moscow-backed separatist since 2014.