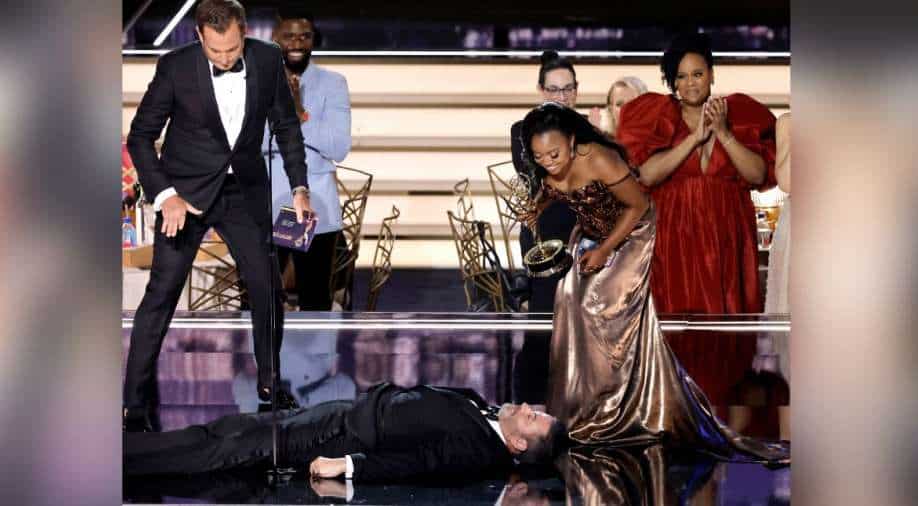 
Jimmy Kimmel’s latest joke on the Emmy stage was not considered funny by many viewers. The popular TV show host and comedian lay on the stage, seemingly ‘passed-out’ as Quinta Brunson went up on stage to accept her award for best writing in comedy series.

Kimmel and Will Arnett appeared on stage to present the award but Kimmel appeared passed out. Arnett quipped to the crown that this is the “13th time in a row that he’s lost and he just got into the skinny margaritas back there.”

As Brunson’s name was announced for her work in ‘Abbott Elementary’, Kimmel lay on the ground with Arnett trying to push Kimmel out of the way. Brunson also quipped, “Jimmy, wake up. I won.” Kimmel gave her a thumbs-up but continued to lie down on the stage throughout the speech, and it wasn’t until after Brunson was done that Arnett dragged him back off.

Arnett tried to push Kimmel out of the way to make room for the winner, with Brunson telling him, “Jimmy, wake up. I won.” For her part, Brunson appeared to be a good sport about the bit, adding the late-night host’s name to the end of her list of thank-you’s.

Later backstage when Brunson was asked about the moment she said it didn’t bother her much but that she wasn’t sure how the internet would react.

She revealed that Kimmel was the host who provided her first major late-night appearance and had previously told her he considers Abbott Elementary to be one of TV’s great comedies.

“I think in that moment, I was just really happy that it was Jimmy up there,” she told reporters. “I kind of consider him one of the comedy godfathers; I’m a huge fan of Will Arnett, so I was wrapped up in the moment. I don’t know — tomorrow maybe I’ll be mad at him. I’m gonna be on his show on Wednesday, so I might punch him in the face. I don’t know. We’ll see what happens.”

While Brunson seem to have taken it sportingly, the internet was not happy with Kimmel’s idea of a practical joke. Many felt it didn’t appear to be a respectful decision to remain on the stage during her big moment.

“Jimmy Kimmel not moving to get out of Quinta Brunson’s way is a (shitty, selfish, bullshit) choice,” tweeted Andy Dehnart, who is secretary of the Television Critics Association. Emmys 2022: Why are awards shows such predictable borefests these days?

Jimmy Kimmel not moving to get out of Quinta Brunson’s way is a (shitty, selfish, bullshit) choice. #Emmys

On Monday night, Quinta Brunson created history as she became the second black woman to win the best writing in the comedy series category.