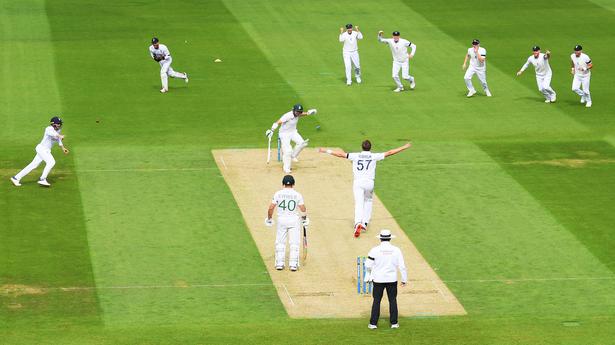 With opening day washed out and no play on Friday, concerns had been expressed as to whether game could be completed inside three days.

With opening day washed out and no play on Friday, concerns had been expressed as to whether game could be completed inside three days.

England stumbled to a 36-run lead after a remarkable, emotionally charged third day of the deciding test against South Africa that saw 17 wickets fall and cricket pay its respects to Queen Elizabeth II in a moving pre-match tribute on Saturday.

After bundling out the Proteas for 118 midway through the second session at the Oval, England got to 154-7 by the time bad light brought an early end to play in the third test.

The match — and a series locked at 1-1 — is very much in the balance in what has essentially become a three-day test after Day 1 was washed out entirely and Day 2 was canceled as a mark of respect following the death of the queen at the age of 96 on Thursday.

“We knew it was only going to be a three-day game,” England fast bowler Stuart Broad said, “so we had to play some entertaining stuff.”

The entertainment came after a solemn start to the day in south London, when players from both teams — all wearing black armbands — walked through a guard of honor formed by military and lined up either side of the wicket.

An impeccably observed minute’s silence was held — “It was incredible. You could hear a pin drop,” said Broad — before a bell was chimed once by a high-ranking member of the military.

The anthems of both South Africa and England were then sung by English soprano Laura Wright. After seven decades of the English anthem “God Save the Queen,” now it was a rendition of “God Save the King” rippling around the ground. Hours earlier Saturday, King Charles III was officially announced as Britain’s monarch in a ceremony, having automatically become king following his mother’s death.

There was a standing ovation as Wright left the field and the players got ready to start the match — two days after the toss was won by England.

England’s seamers were excellent, with Ollie Robinson taking 5-49 and Broad weighing in with 4-41 to join former Australia pacer Glenn McGrath on 563 wickets for his test career — tied for fifth place on the all-time list.

For Robinson, it was a third five-wicket haul in tests after regaining his place in the team during this series following fitness issues.

He took four of the first six wickets as the Proteas slumped to 36-6 before Khaya Zondo (23) and Marco Jansen (30) led in a mini-recovery.

Robinson completed his five-fer before Broad took the final two wickets to wrap up the innings in 36.2 overs.

The Proteas fought back well in the final session, though, as Jansen removed Joe Root (23) and debutant Harry Brook (12) to finish with figures of 4-34.

Some of England’s shot-making left a lot to be desired, even if the aggressive style followed the team’s new approach demanded by captain Ben Stokes.

Stoke wafted behind for 6 and Broad fell for the same score, leaving Ben Foakes (11) and Robinson (3) in the middle when the players came off for bad light.