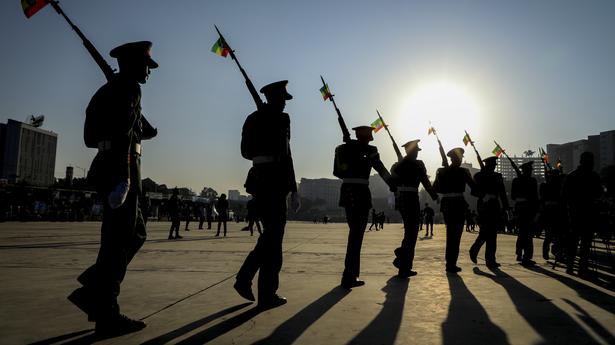 The Tigray forces battling Ethiopian troops say they’re willing to abide by immediate cessation of hostilities and participate in a peace process led by the African Union, a significant shift to which Ethiopia’s government has not yet responded.

The conflict in northern Ethiopia’s Tigray region has killed an estimated tens of thousands of people and left millions without basic services for well over a year after fighting erupted in late 2020.

The Tigray authorities’ statement on Sunday night came after new pressure by the United States and others following the renewal of fighting last month that shattered months of relative calm. Witnesses have described heavy fighting along the region’s borders.

The Tigray authorities had criticized AU mediation efforts under special envoy Olesegun Obasanjo. Their new statement makes clear they expect “mutually acceptable mediators” along with international observers and experts to guide the process.

The Ethiopian government has said it was ready for talks anywhere at any time and without preconditions. Tigray authorities had demanded the resumption of basic services and the removal of hostile forces from neighboring Eritrea, among other things.

The recent fighting has triggered new diplomatic activity behind the scenes. The U.S. has played a leading role in mediating between the two sides, according to two diplomatic sources in Addis Ababa, who also said talks were expected in Djibouti. The sources spoke on condition of anonymity because they were not authorized to speak publicly.

The U.S., AU, United Nations and European Union welcomed the Tigray authorities’ new statement, and the U.S. called on Eritrea and unnamed “others” to stop fueling the conflict.

Ethiopia’s national security adviser, Redwan Hussein, did not comment on the Tigray statement. Instead, he told The Associated Press that the U.N.-established International Commission of Human Rights Experts on Ethiopia was no longer welcome in the country. “There’s no point” for Ethiopia to cooperate with a ”politically motivated” group seen as trying to demonize the government, he said.

The commission, which recently visited Ethiopia, last week issued a statement of concern about the renewed fighting, saying Eritrean forces are involved and that “the conflict risks spreading to other states.”

The fighting has again cut off deliveries to Tigray of humanitarian aid, which had revived in a limited way during the lull in fighting earlier this year. Aid deliveries also have been suspended to parts of the neighboring Amhara region affected by the fighting.

An aid worker told the AP on Friday there has been heavy fighting on “seven or eight fronts” along Tigray’s borders. A second aid worker said Eritrean troops had shelled the Tigray towns of Adigrat and Sheraro and had launched attacks against Tigray forces’ positions in several places.

The second aid worker said several thousand people displaced by the fighting around Sheraro arrived in the city of Shire last week. They also said a bridge linking Shire to the Amhara region has been destroyed. The bridge was blown up last year and later repaired.