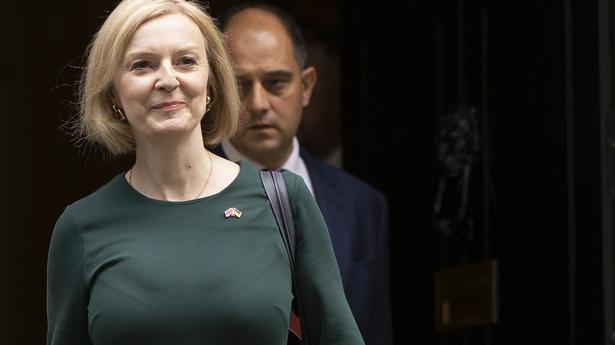 With the energy price guarantee, average households in the U.K. will save around £1,000 a year, starting October 1.

The story so far: Newly-appointed U.K. Prime Minister Liz Truss unveiled her energy plans for the country on Thursday amid rising inflation and growing concerns for a crisis in Europe as a fallout of the Russia-Ukraine war. Under the “two-year energy price guarantee”, typical household energy bills will be an average of £2,500 ($2,872) a year for heating and electricity, Prime Minister Truss told Parliamentarians on Thursday.

What are the highlights of the new energy plan?

With the energy price guarantee, average households will save around £1,000 a year, starting October 1. This includes a temporary removal of green levies worth around £150 per household. The guarantee will supersede the existing energy price cap.

The energy price guarantee is in addition to the £400 energy bills discount for all households. The government also said that people who do not pay directly for mains gas and electricity will be “no worse off” and receive support through a new fund. This includes those living in park homes or on heat networks.

The government’s intervention in energy costs will bring down inflation by four to five percentage points, the Prime Minister said. In July 2022, Britain’s consumer price inflation rose to 10.1% , its highest since February 1982. Recent data released by the Office for National Statistics also revealed that U.K.’s economy shrank 11% in 2020, its biggest fall in output in more than 300 years. The 11% drop in the gross domestic product (GDP) is the largest fall since 1709, according to historical data hosted by the Bank of England.

The energy price guarantee will be automatically applied when energy bills are calculated. Consumers do not have to file any separate applications for the same.

Prime Minister Truss’s new energy policy applies to households in Britain, but those in Northern Ireland will also get the same amount of support, even under a different energy regime. The government, however, has not specified in detail how it plans to support homes in Northern Ireland.

According to National Energy Action, 910 excess winter deaths were recorded across Northern Ireland in 2018-19. This is directly linked to cold homes, the analysis said.

There is plenty of evidence of the link between #ExcessWinterDeaths and exposure to cold homes.

Living in a cold home increases the risk of circulatory and respiratory diseases. Urgent need to address rising energy prices ahead of the winter to protect vulnerable households. pic.twitter.com/ErrerVbAMy

Over the winter, the six-month scheme for non-domestic users, including businesses, charities and schools,will offer support equivalent to that given to consumers, to protect them from “soaring energy costs”. After six months, the government plans to provide focused support to “vulnerable industries”.

Details regarding the cost of the energy plan will only be released later this month, The Guardian reported. Chancellor Kwasi Kwarteng will outline the details in a fiscal statement.

The Prime Minister has, however, said that she will not accept the Labour party’s demand for a windfall tax.

What is windfall tax?

A windfall tax is levied by the government on a sector or a company if they make above-average profits due to changes in economic conditions.

Energy companies in the U.K. have recently made extraordinary profits compared to previous years due to disruptions in supply from Russia. Rejecting the idea of levying a windfall tax in Parliament, Ms. Truss said, “I don’t believe we can tax our way to growth.”

How much will households pay for electricity?

According to a factsheet released by the U.K. government (estimates based on 2019 median consumption), flats will pay around £1,750 annually (£1,950 for converted flats and £1,750 for purpose-built flats) under the energy price guarantee. On the other hand, bigger properties like detached houses will approximately pay £3,300 and semi-detached houses will pay £2,650 annually for energy under Prime Minister Truss’s new scheme.

It is important to note that the energy price guarantee is not a cap on the overall bill but on the unit cost of energy, and the final bill will depend on the usage.

How will the government bear the costs?

In order to tackle the costs of the new energy price guarantee, the government’s primary focus will be on ramping up supply. A new Energy Supply Taskforce, led by Madelaine McTernan, has been set up to achieve this goal. This task force has already begun negotiations with suppliers for long-term contracts in order to reduce energy costs and at the same time, increase supply security. They will also conduct a new oil and gas licensing round which is expected to lead to more than 100 new licences.

Prime Minister Truss also said that her government will set up a new scheme with the Bank of England to ensure liquidity for firms in the wholesale energy market. This will help manage price volatility and ensure stability for both energy and financial markets, Ms. Truss said. This scheme is estimated to cost £40 billion.

U.K. as an energy exporter

Laying emphasis on energy security, Ms. Truss also said that she aims to make the U.K. a net energy exporter by 2040. Her proposal seeks to achieve this by:

“This Tory prime minister (Ms. Truss) nodded through every single decision that got us into this mess and now says how terrible it is,” Mr. Starmer said.

Labour would freeze energy bills through a windfall tax on oil and gas profits.

Liz Truss won’t touch those profits. Instead, she wants working people to pay for decades to come.

Only Labour can offer Britain a fresh start. pic.twitter.com/02DRe71iGD

He also said that the country’s borrowing will increase because of Ms. Truss’s plans to not impose a windfall tax. “Every pound the government refuses to raise in windfall taxes…is a pound of extra borrowing. It’s that simple,” Mr. Starmer was quoted as saying by The Guardian. According to the Labour Party, saying no to windfall tax means that British taxpayers will have to pay for the government’s decision to freeze energy bills.

End Fuel Poverty Coalition, a collective of “anti-poverty, environmental and health campaigners”, said that even with a freeze on energy bills, over 400 neighbourhoods across the country will see significant fuel poverty and need extra help to cope with the harsh winters.

Despite the #pricecap freeze plan, over 400 neighbourhoods across swathes of the country – from Southampton to Middlesborough and from Essex to Lancaster – will see significant levels of #fuelpoverty and will need extra help to stay #warmthiswinterhttps://t.co/kTwStRviEo

“We also need additional help for the millions of households in fuel poverty who are already struggling,” the collective said in a statement.

Adam Scorer, Chief Executive of the NGO National Energy Action, said that even with the freeze, the average bill has doubled in a year. “Last year, 4.5 million U.K. households were fuel poor, now we predict that it will be 6.7 million,” he said in a statement.

Our chief executive @adam_scorer reacts to Liz Truss’s announcement that she will freeze the GB price cap. It means the average annual energy bill will be around £2,500 instead of £3,549 but millions are still struggling. #EnergyBillspic.twitter.com/lj1dyKAJQt