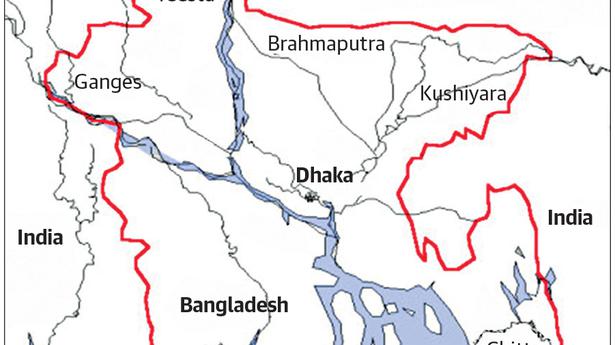 The story so far: During Bangladesh Prime Minister Sheikh Hasina’s visit to India from September 5 to 8, the two sides signed a slew of agreements, including the first water sharing agreement since the landmark Ganga Waters Treaty, 1996. A memorandum of understanding (MoU) was signed on sharing of the waters of the Kushiyara river, a distributary of the Barak river which flows through Assam, and then on to Bangladesh. The agreement comes in a year when both lower Assam in India and Sylhet in Bangladesh have witnessed deadly floods highlighting the requirement for greater cooperation on flood control and irrigation-related issues between the two countries.

What is the Kushiyara agreement?

Over the last century, the flow of the Barak river has changed in such a way that the bulk of the river’s water flows into Kushiyara while the rest goes into Surma. According to water expert, Dr. Ainun Nishat, the agreement is aimed at addressing part of the problem that the changing nature of the river has posed before Bangladesh as it unleashes flood during the monsoon and goes dry during the winter when demand of water goes up because of a crop cycle in Sylhet. Though the details of the agreement are not yet known, Dr. Nishat says that under this MoU, Bangladesh will be able to withdraw 153 cusecs (cubic feet per second) of water from the Kushiyara out of the approximately 2,500 cusecs of water that is there in the river during the winter season. Under the agreement, Bangladesh will be able to withdraw 153 cusecs (cubic feet per second) of water from the Kushiyara that will solve the water crisis for farmers of Sylhet. There are various estimates about the area that will benefit from this supply but it is generally understood that approximately 10,000 hectares of land and millions of people will benefit from the water that will flow through a network of canals in Sylhet benefiting the farmers involved in Boro rice, which is basically the rice cultivated during the dry season of December to February and harvested in early summer. Bangladesh has been complaining that the Boro rice cultivation in the region had been suffering as India did not allow it to withdraw the required water from the Kushiyara. The agreement addresses Bangladesh’s concern over water supply along the river, during the winter months but flood control in the basin of Kushiyara is expected to require much more work.

How will Bangladesh use the water?

The water of Kushiyara will be channelled through the Rahimpur Canal project in Sylhet. The Rahimpur Canal project in Zakiganj upazila or subdivision of Sylhet was built to help the farmers access Kushiyara’s water but the facility used to remain dry during the lean season without serving the purpose for which it was built. The eight km long canal is the only supplier of water from the Kushiyara to the region and Bangladesh has built a pump house and other facilities for withdrawal of water that can now be utilised.

Why is the water from the Kushiyara so important for Rahimpur Canal?

The water of the Kushiyara has been used for centuries in Sylhet’s subdivisions like the Zakiganj, Kanaighat and Beanibazar areas. But Bangladesh has witnessed that the flow and volume of water in the canal has reduced during the lean season. The utility of the river and the canal during the lean/winter season had gone down, affecting cultivation of rice as well as a wide variety of vegetables for which Sylhet is famous. The additional water of Kushiyara through the Rahimpur Canal therefore is the only way to ensure steady supply of water for irrigation of agriculture fields and orchards of the subdivisions of Sylhet.

What was India’s objection to the Rahimpur Canal?

The Kushiyara water sharing agreement finalised during the August 25 Joint River Commission and signed during Prime Minister Hasina’s visit was made possible as India withdrew its objection to withdrawal of Kushiyara’s waters by Bangladesh through the Rahimpur Canal. Withdrawal of India’s objection is likely the main part of the agreement, said Dr. Nishat. Before this, Bangladesh had carried out the Upper Surma Kushiyara Project which included clearing and dredging of the canal and other connected channels of water; but the channels could not be of much use to Bangladesh because India objected to the move and claimed that the dyke and other infrastructure interfered in border security as Kushiyara itself forms part of the border between the two sides. The agreement indicates that the economic benefits possible from the river outweighed the security concerns. The fertile plains of Sylhet that is watered by Meghna and its tributaries including Kushiyara are known to produce vegetables that have great market potential for the immediate bordering States of India as well as in Bangladesh and abroad.

Editorial | The spirit of 1971: On India-Bangladesh relations

What are the hurdles to the Teesta agreement?

The Kushiyara agreement is relatively smaller in scale in comparison to Teesta that involves West Bengal, which has problems with the proposal. The Kushiyara agreement did not require a nod from any of the States like Assam from which the Barak emerges and branches into Kushiyara and Surma. The reduced water flow of the Kushiyara during winter and Teesta too, however, raise important questions about the impact of climate change on South Asian rivers that can affect communities and trigger migration. Bangladesh has cited low water flow in its rivers during the winter months as a matter of concern as it affects its agriculture sector. Dr. Nishat contends that the coming decades will throw up similar challenging issues involving river water sharing as the impact of the climate crisis becomes more visible with water levels going down in several cross-border rivers.