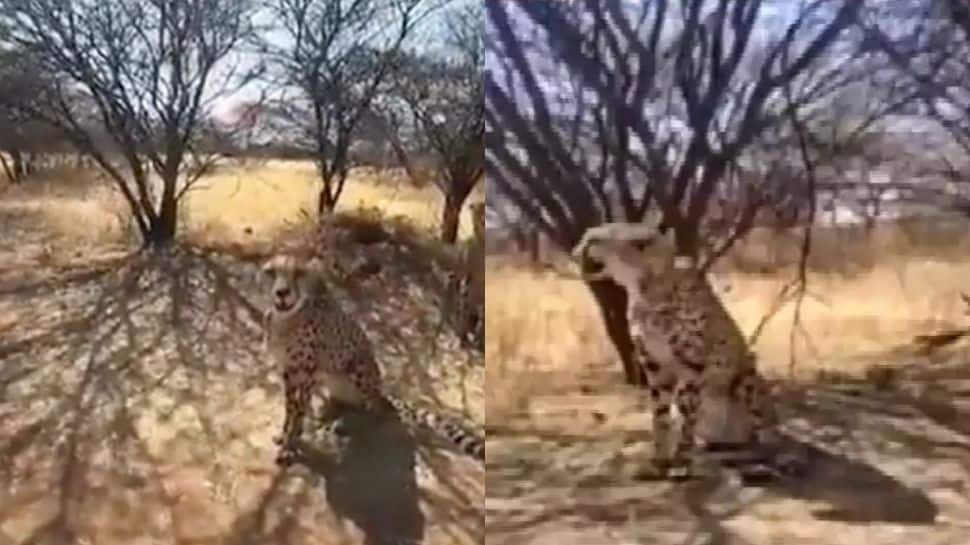 
New Delhi: A first look of the cheetahs that will be brought from Namibia to India was shared by news agency ANI on Twitter on Friday (September 16, 2022). The one-minute-long video, posted on Twitter, shows two cheetahs resting under a tree.

#WATCH | First look of Cheetahs that will be brought from Namibia to India on 17th September at KUNO National Park, in Madhya Pradesh pic.twitter.com/HOjexYWtE6
— ANI (@ANI) September 16, 2022

Madhya Pradesh’s Kuno-Palpur National Park (KPNP) is all set to welcome eight Cheetahs, which will be brought to the country on a special cargo flight. A female cheetah and two brothers who hunt together as a team are among the eight big cats that will be part of the reintroduction project.

The eight cheetahs – five females and three males will be brought from Namibia’s capital Windhoek to Gwalior airport in a customised Boeing 747-400 aircraft, officials have said earlier.

A day before the scheduled arrival of eight cheetahs from Namibia, the authorities revealed that the landing destination of the special cargo plane carrying these felines has been changed – from Jaipur in Rajasthan to Gwalior in Madhya Pradesh.

These cheetahs will be flown to Gwalior early on Saturday morning, from where they will be carried in a special helicopter to the Kuno National Park (KNP) in Sheopur district of Madhya Pradesh, where Prime Minister Narendra Modi will release three of them into the park’s quarantine enclosures, an official said.

“PM Modi will release two Cheetahs from enclosure number one and after that about 70 metres away, which is the second enclosure, will release another Cheetah. The remaining Cheetah will be released in their respective quarantine areas made for them,” ANI quoted SP Yadav as saying.

The large carnivore were declared extinct in India in 1952. They got completely wiped out from India due to their use for coursing, sport hunting, over-hunting and habitat loss.

The last cheetah in India died in 1947 in Korea district in present day Chhattisgarh, which was earlier part of Madhya Pradesh.

The ‘African Cheetah Introduction Project in India’ was conceived in 2009 and a plan to introduce the big cat by November last year in KNP suffered a setback due to the COVID-19 pandemic, officials said.