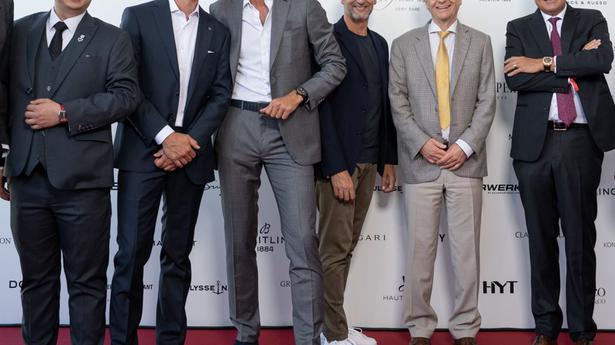 At the third edition of the fair, brand CEOs talk about getting limited edition pieces on the wrists of real watch lovers

At the third edition of the fair, brand CEOs talk about getting limited edition pieces on the wrists of real watch lovers

Geneva Watch Days, founded at the height of the pandemic, pushed the envelope this year by making the best of in-person events yet not forgetting its initial virtual audience.

The 35 popular maisons and independents that participated at this decentralised fair were aided by both watch magazines and experts who pulled out all the stops with their storytelling. Some got the flamboyant CEOs, watchmakers and creative heads out in the sun with the Jet d’Eau fountain sparkling in the background.

But the burning question at this public-friendly fair was to do with the phenomenal rise of independent watchmakers and demand outstripping supply. Exports for the first half of this year grew by 11.9% over the same period in 2021. And often, with several hundred takers for one limited edition watch, how were these brands identifying the right wrist for their precious timepieces? How do they allocate them to new clients so they grow the base, while being loyal to longtime customers?

Over a Zoom call, Bulgari’s Babin, who introduced the mirrored new Sejima Edition of the Octo Finissimo says that exclusivity is important but that shortlisting customers is difficult. The mirrored Octo Finissimo created in collaboration with Pritzker-winning Japanese architect Kazuyo Sejima and limited to 360 pieces will be most in demand in Japan, obviously.

“We will have fair allocation to the market and the countries according to the credentials and the clientele and their role in our portfolios. We try to be flexible for our sister companies who may make a request for their clients but the trick is to buy it immediately,” says Babin, a big fan of collaborations.

Edouard Meylan of H Moser & Cie, admits that much research goes into ensuring they have the right clients. “We follow the market daily and check every sale to make sure that we do not sell to a flipper,” says the CEO and owner of the brand, referring to watch investors who buy hype or hot watches at retail only to quickly sell them on the secondary market.

“We are constantly in contact with our distribution network and our community,” continues Meylan. He reveals that while the phenomenal Streamliner Vantablack Tourbillon, released at the fair, is part of the permanent collection and isn’t limited, their order books are already full for the next two years. “We do not take orders after that.”

Revival brand Czapek & Cie, which in April announced a one-year pause on all orders for their Antarctique, a 2020 runaway success, has a similar strategy. “After having seen some of our most sought-after limited editions sold on the secondary market for high multiples, we decided that in the future we will follow the example of Ferrari for our limited-edition models – allocating them only to trusted collectors or partners having a passion for watches and not looking for a quick return,” says CEO Xavier de Roquemaurel.

Czapek prides itself on its transparency, and surprised the market seven years ago with its equity crowdfunding approach.

For a brand that insists on making every watch from scratch, that aims for a three-week turnaround from order to delivery, what has changed now with increasing demand?

“In 2021, we delivered around 300 watches, this year we aim to deliver between 400 and 600 pieces,” explains de Roquemaurel. “But we have some 2700 watches in our order backlog… that’s why we closed the Antarctique order book until next year. Meanwhile, we are reorganising our workflow to reach a production of up to 3000 watches per year.”

Read online for the best watches from GWD and interviews with watch CEOs on collaborations.