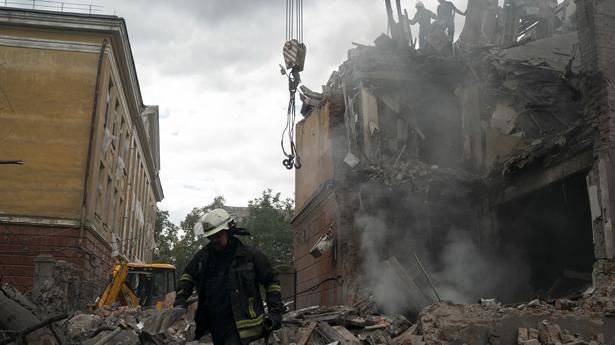 President Volodymyr Zelensky announced late on Friday that his troops had retaken some 30 towns and villages in the northeastern Kharkiv region as part of the sweep.

Kyiv said on Saturday that its forces were making lightning gains in the east of the country in a shock counter-offensive to recapture territory that fell to Russia shortly after Moscow’s February invasion.

“It’s crucial to keep sending arms to Ukraine. Defeating Russia on the battlefield means winning peace in Ukraine,” he added.

His assessment of the pace of the Ukrainian gains came after President Volodymyr Zelensky announced late on Friday that his troops had retaken some 30 towns and villages in the northeastern Kharkiv region as part of the sweep.

Moscow made the surprise announcement it was dispatching reinforcements to Kharkiv, with images on state media showing tanks and artillery and support vehicles moving in columns on dirt roads.

The largest city so far to fall into Ukrainian hands again is Balakliya with an estimated pre-war population of around 30,000.

There were unconfirmed reports that Ukrainians were advancing further east.

The capture of urban hubs like Kupiansk and Izium would be a significant blow to Russia’s ability to effectively supply positions on the eastern frontline.

In one village captured by the advancing Ukrainians, electric pylons were toppled and cables strewn lay across the ground and houses were gutted, AFP journalists reported.

“It was frightening,” said 61-year-old Anatoli Vasiliev recalling the battle earlier this week that saw Ukrainian forces recapture the village from the Russians.

“There were bombings and explosions everywhere.”

German Foreign Minister Annalena Baerbock meanwhile arrived in the Ukrainian capital for a surprise visit, which she said was to demonstrate Berlin’s support for Ukraine in its battle against Russia.

Baerbock was in Kyiv Saturday for her second trip to Ukraine, which comes a week after Ukrainian Prime Minister Denys Shmygal’s trip to Berlin where he had repeated Kyiv’s call for weapons.

“I have travelled to Kyiv today to show that they can continue to rely on us. That we will continue to stand by Ukraine for as long as necessary with deliveries of weapons, and with humanitarian and financial support,” she said.

Over the last weeks, Germany has sent howitzers, rocket launchers and anti-aircraft missiles to Kyiv, part of an arsenal of Western-supplied weapons that observers say have hurt Russia’s supply and command abilities.

Baerbock’s visit comes on the heels of a trip from U.S. Secretary of State Antony Blinken who promised a nearly $3 billion military package for Ukraine.

In a meeting in Brussels with NATO Secretary General Jens Stoltenberg, Blinken said Russia’s push to send reinforcements showed Moscow was paying “huge costs” in its bid to capture and then hold Ukrainian territory.

However, Russian forces were still inflicting serious damage with a campaign of shelling in Kharkiv city and in the industrial region of Donbas in the east.

Pavlo Kyrylenko, the head of the Donetsk region, which is part of Donbas, said Russian shelling meanwhile had left two dead.