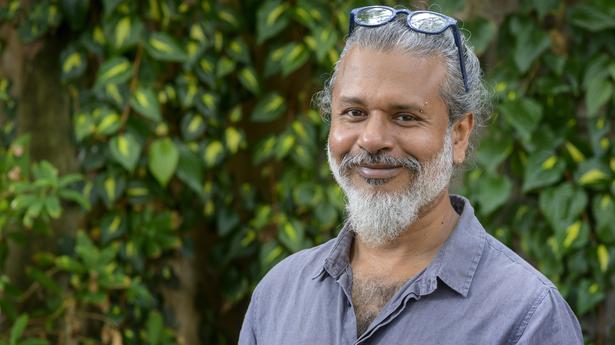 Sri Lankan writer Shehan Karunatilaka became a star over a decade ago with his brilliant cricket-themed debut novel,  Chinaman: The Legend of Pradeep Mathew, that won him some top awards. His latest,  The Seven Moons of Maali Almeida, shortlisted for the 2022 Booker Prize, was originally published in India as Chats with the Dead in 2020. The 47-year-old juggles writing alongside an advertising career and music as a hobby. Both are essential and help fuel his creativity in different ways, he says. Edited excerpts from an interview:

Did you shout in delight on hearing the Booker news after the exacting last few months?

It’s been an exacting few years. I lost whatever faith I had left in this country after the Easter Attacks of 2019. Since then, the decline has been steady and then sudden.

During that time, I was editing and revising this novel, which had been in my head for 10 years, but struggled to find an international publisher.

I was walking my five-year-old to school while my wife sat in a petrol queue when I got the news. Couldn’t really shout, but celebrated with a bag of cashew and a can of toddy.

How different is The Seven Moons of Maali Almeida from Chats with the Dead?

The book was revised for an international audience during the pandemic. So that the details of Sri Lanka in 1989 and the complexity of the afterlife wouldn’t confuse. It’s the same book, though  Moons is more accessible to an audience unfamiliar with Sri Lankan politics and folklore.

How did you hit upon the idea of writing a whodunnit about the dead and their ghosts?

It was what I remember as the worst time in Sri Lankan history. A civil war, a Marxist revolt, an Indian army, state counter terror squads. It was a time of disappearances and unidentified corpses. I thought a ghost story would be an interesting way of making sense of this trauma and the many traumas that unfolded.

Demonstrators face off with the police during an anti-government protest at the height of Sri Lanka’s economic crisis, in Colombo, August 2022.
| Photo Credit: Reuters

Any tacit messaging in creating the central character — the war photographer who is gay, nihilist and atheist?

Maali evolved across many drafts. He began as a version of Richard de Zoysa, who was a journalist, activist and bisexual, and was killed by the state in 1990. But each draft gave Maali a new dimension and worldview. Being a war photographer and seeing the carnage made it difficult for him to believe in a god or a cosmic order. So he found refuge in closeted sex and games of chance.

Character isn’t about messaging, more about what feels authentic and comes alive on the page. If anything, Maali Almeida, like Pradeep Mathew in  Chinaman, demonstrates that the most interesting characters live on the fringes of history.

You told the story through Malinda, inventing an afterlife that is morbid and funny. Have you given Sri Lanka’s dead an effective voice?

None of it is easy, though it can be fun. The afterlife as a messy bureaucracy presided over by an absent god was an appealing idea. Chatting with Sri Lanka’s dead was challenging as real ghosts are difficult to interview. Though I hope each spirit had their own voice and justified their place in the plot.

Your initial experience with publishers was disheartening, compelling you to self-publish Chinaman. Has it become better now?

I hope it has. When I wrote  Chinaman, there was no clear path for Sri Lankan writers other than to enter it for the Gratiaen Prize and self-publish with the prize money.

There are plenty of stories to tell about Sri Lanka’s present and its past, and many talented writers to tell them. But publishing internationally is always a challenge, though there seem to be more doors opening for subcontinental writers. I’ve also seen younger writers like Yudhanjaya Wijeratne, who sidesteps the traditional model to reach global audiences directly with his dystopian stories.

Your children’s title Please Don’t Put That In Your Mouth is a striking picture book. Will there be more?

This is what the kids call a side hustle. My brother Lalith and I write and design books for toddlers. We average one every year but we’re trying to double production.

I’m currently working on a third Baby Baba book about sleep and a story for older kids about insects.

Have you modelled yourself after any of your literary heroes?

My early heroes were Agatha Christie, Stephen King, Ira Levin and Neil Gaiman; current heroes are Margaret Atwood, George Saunders, Cormac McCarthy and David Mitchell. The ones I try to write like are Kurt Vonnegut and William Goldman.

Although as a subcontinental writer, there’s no shortage of literary role models like Rushdie, Ondaatje, Gunasekera, Hanif, Jeet, Kamila, Mohsin, Jhumpa and Naqvi. Not sure how to model, but I think reading them is enough education.

Your views on contemporary Anglophone literature in Sri Lanka?

If the country is cursed, at least its storytellers are blessed with an abundance of material. Today, there are compelling voices across literary genres, as well as in film, theatre and on social media. I hope more writings from Sri Lanka — Anglophone, Sinhala or Tamil — find publishers and readers, because there’s plenty to tell and lots to learn.

Given the many new stories, another novel set in Sri Lanka?

I think all stories will be set in Sri Lanka until I find another place that’s as absurd and bewitching. I’ve got a third novel in the works, and a couple of children’s books to finish. Might do a screenplay if I can con someone into commissioning it.

The interviewer is a Bengaluru-based independent journalist and writer.