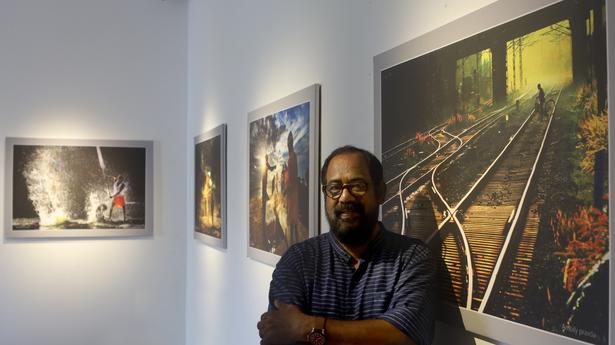 
The 30 photographs by Ambily Pravda on show at Durbar Hall Art Gallery demand a closer look. Many look like oil paintings rendered on canvas . “ The canvas gives that quality. “Material needed to print photographs – bromide paper, chemicals for processing – are all hard to come by. The option then was to print on canvas,” says the veteran photographer, whose works were on show at, Chayapadam.2, Durbar Hall Art Gallery from August 30 to September 2. .

With three decades of experience , this is Pravda’s first solo show. All the photographs on the show — fishers and their catch, a man sipping tea at a tea shop, houses on the side of a hill lit up at night, an oarsman on a snake boat… have been shot in natural light and are striking in the simplicity. “I have tried to capture the play of light and shadow. It is the quality of light that gives life to a photograph. The best time to click is between 4 pm and 9 am. The light at midday can be unflattering.”

The play of light and shadow give a chiaroscuro effect to the images adding a sense of movement. If you look long enough at them they appear to be moving. The colours also give the photographs a pop art-like quality.

“Photography is hard work, we don’t have the luxury of a painter or any other artist who mines his imagination for his creative work. The perfect frame is not there, a photograph is not waiting for you to click it. You work with an idea of how you would like a frame and then wait for the photo to happen.” The photographs have been clicked during the course of his travels.

“I have so many photographs saved on my computer. Rather than just keep them there, I thought why not share them with others,” he says about the show adding that “There is hardly a market for prints of photographs such as these, I don’t expect to make money out of these anyway.”