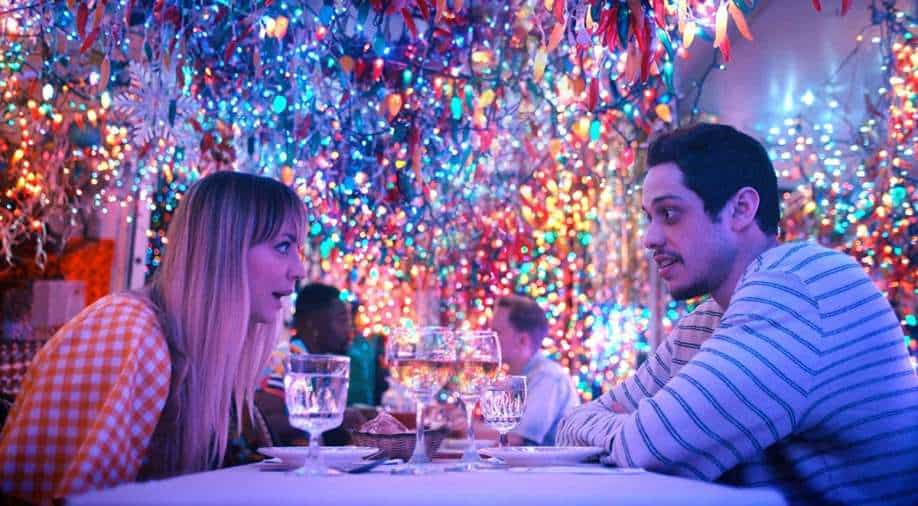 
A trailer for the upcoming romantic comedy ‘Meet Cute’ is here. Starring Kaley Cuoco and Pete Davidson, the first few moments of this movie’s trailer lull you into believing that this is just another romcom — watchable, fun even, but ultimately not memorable. But it soon takes a dark turn. A very dark turn, indeed. Written by Noga Pnueli and directed by Alex Lehmann, ‘Meet Cute’ has a young woman Sheila (Cuoco) contemplating talking to a young man Gary (Davidson) while in a bar. She strikes up conversation but, we are led to believe, it does not go as well as she would like.

They then order drinks and find similarities in their choices. Turns out, this is not the first time Sheila has talked to him. She discovered a time machine earlier and has revisited the same date over and over, creating new timelines in the process. Sheila also disposed of other Sheila from other timelines in inventive and violent ways. She did that to create the perfect date and a perfect romantic partner in Gary.

When Gary, or a hundredth or thousandth version of him, discovers what she has done, he is understandably horrified.

The film, as the trailer ends, looks more like a dark comedy than a rom-com, and Sheila is less a charming heroine than a psychopath. Nevertheless, ‘Meet Cute’ looks worth waiting for.

The official synopsis reads, “When Sheila (Kaley Cuoco) and Gary (Pete Davidson) meet, it’s love at first sight – until we realize their magical date wasn’t fate at all. Sheila’s got a time machine, and they’ve been falling in love over and over again. But when the perfect night is never quite enough, Sheila travels to Gary’s past to change him into the perfect man.”