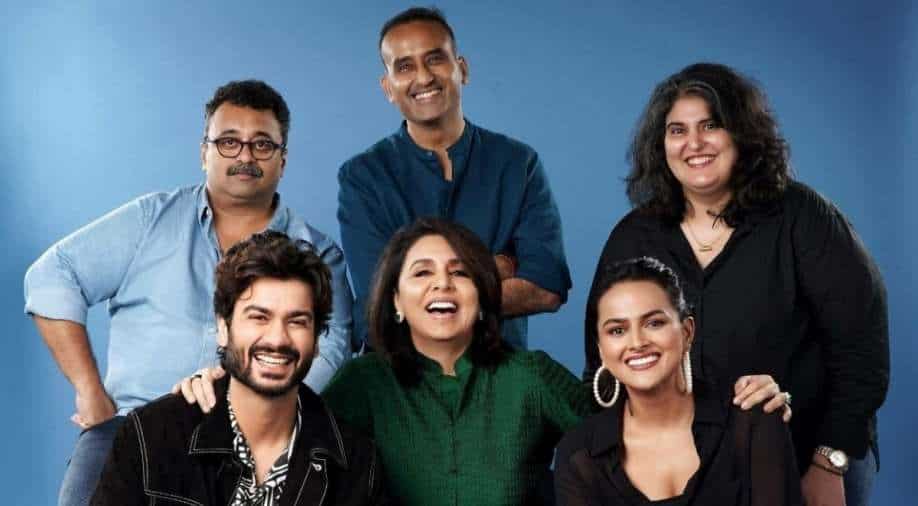 
Neetu Kapoor, Sunny Kaushal and Shraddha Srinath have joined hands for a new feature film which showcases the unique bond between a mother and son. Directed by Milind Dhaimade, this film will feature Neetu Kapoor in a never-before-seen avatar, according to the makers.

The project will mark Lionsgate India Studios’ first feature film. Film and television studio Lionsgate has made a quiet but impactful entry into India. Living up to the pedigree of compelling content, Lionsgate over the past year has intended to cater to both contemporary Indian audiences as well as its global audience on STARZ streaming service Lionsgate Play. Since last year, the studio has produced a unique slate; be it an urban slice of life comedy Hiccups & Hookups to intense young adult drama Jugaadistan, or the bromantic hangover of four boys Feels Like Home, Lionsgate in India is selecting stories that resonate with an eclectic global audience.

Taking it up a notch, Lionsgate India Studios’ first feature film stars Neetu Kapoor, Sunny Kaushal, and Shraddha Srinath. This untitled, coming-of-age story will capture the beautiful and relatable relationship between a mother and her son. Using comedy as its main premise, the film delves into the integral fabric of families, communication, and memories, as well as their role in forcing us to grow up. Directed by Milind Dhaimade the film will be an unmissable creation that will leave audiences wanting to see more family dramas.

Rohit Jain, MD, South Asia and Networks – Emerging Markets Asia, Lionsgate said, “Lionsgate remains bullish on investments in India spotlighting the region in the global growth strategy. Lionsgate Studios in India is delighted to announce its maiden Hindi film. With Milind at the helm of it, each character has been cast perfectly to depict this beautiful story that we’re sure audiences will love. We are running at a rapid pace with 8-10 grand projects in the pipeline, within a year – expect big announcements coming your way soon from the Lionsgate India Studios’ desk.”

Director, Milind Dhaimade said, “For me, it’s very critical who is partnering with you in creating the film, since a film is made even before it goes on the floor. All the ingredients that are necessary to put the film together have already been decided. I feel in this aspect Lionsgate India Studios’ vision for the film, along with a stellar cast will be wonderfully refreshing. This is a mother-son relationship that will resonate with everyone irrespective of region, and our casting will help audiences across India connect to a relatable story.”

Veteran actress, Neetu Kapoor said, “When I read the script, I fell in love with it. It goes beyond the regular mother-son story and explores a different side that sets a unique tone to the rom-com genre. I am excited to be part of Lionsgate Studios’ first production, in a movie, I believe will touch hearts and remain close to my heart.”

Talented actor, Sunny Kaushal said, “The moment I read the script, I knew it’s a special film that I just had to be a part of! It is an ode to all the mothers, their wishes, and their sacrifices! I am really looking forward to working with Milind sir, Lionsgate India Studios and Neetu ji on this special project!”

Popular Indian film actress, Shraddha Srinath said, “This is a sweet, warm, delightful script. I remember smiling from ear to ear while reading it. We are all so busy watching and making dark, thrilling, and mind-bending content; there aren’t enough films that focus on moments and relationships and the simplicity of life. I’d watched Milind sir’s previous work way before I met him and truly enjoyed watching Tu Hai Mera Sunday. I’m glad Lionsgate India Studios sees the film for the gem that it is. I can’t wait to breathe life into the character and create magic on screen. Really fortunate to be part of this project.”

This venture comes from the stellar catalogue slate that includes global film and television franchises like The Hunger Games, The Twilight Saga, John Wick, Orange is the New Black, La La Land, and Saw, among many others