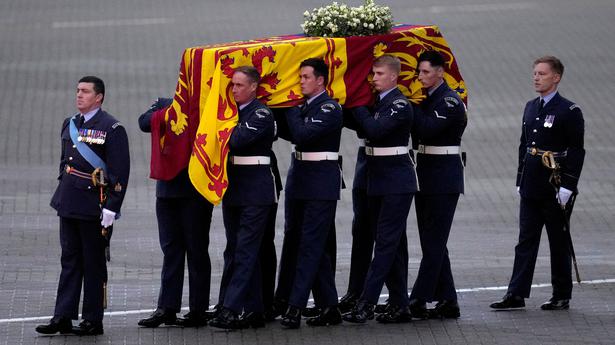 King Charles visits Northern Ireland, pledges to “seek the welfare of all the inhabitants”

King Charles visits Northern Ireland, pledges to “seek the welfare of all the inhabitants”

The coffin of Queen Elizabeth II returned to Buckingham Palace on Tuesday evening, making its way through a drizzly London as crowds lined the route for a glimpse of the hearse and to bid her a final farewell.

People parked their cars along a normally busy road, got out, and waved as the hearse, with lights inside illuminating the flag-draped coffin, made its way into London. In the city, people pressed in on the road and held their phones aloft.

Thousands gathered outside the palace cheered and clapped as the hearse swung around a roundabout in front of the queen’s official residence and through the wrought iron gates. King Charles III and other royals waited to greet the casket.

More than 26,000 people, as per an official count, paid their respects in Edinburgh to the Queen Elizabeth II at St. Giles Cathedral, queuing up through the night to file past her coffin.

Also Read | Queen of the world

Earlier in the day, King Charles III, the U.K.’s new monarch, and his wife, Camilla, the ‘Queen Consort’ as she is now known, visited Belfast, the capital of Northern Ireland, where the King met with a diverse group of political leaders at a reception, and faith leaders  from various backgrounds [including Chinese, Muslim and Hindu] at a church service for the Queen. British Prime Minister Liz Truss was also in attendance at the church. There, he pledged to “seek the welfare of all the inhabitants” of Northern Ireland.

Sinn Fein, the de facto political wing of the former Irish Republican Army (IRA), did not attend the ceremony proclaiming the King over the weekend, but its first minister-designate, Michelle O’Neill participated in the King’s visit on Tuesday and offered her condolences.

While mourners, in the tens of thousands, paid their respects to the Queen, there have also been a few protestors trying to exercise their right to protest and – specifically – protest the institution of monarchy.

A group opposite the entrance to the cathedral held up blank signs to signify their right to protest, the Guardian reported. They were there because people were being detained for showing anti-monarchy signs, one protestor told the newspaper.

On Saturday, a 22-year-old woman carrying a sign “F*** Imperialism”, “Abolish Monarchy”, was arrested and charged on “breach of peace” grounds.

Also Read | End of an era: On Queen Elizabeth II

On Monday, footage emerged on social media, of a 22-year-old man being pushed to the ground by an individual on the Royal Mile in Edinburgh after he heckled the Queen’s son, Prince Andrew, the Duke of York, who along with his siblings, was walking behind the vehicle carrying his mother’s coffin on the Royal Mile in Edinburgh.  He was then taken away by a police officer and has been charged.

“Andrew, you’re a sick old man,” the man had said. The Prince had reached a settlement over allegations of having sex with a minor in the United States.

These were the arrests made for protesting.

Republic, a group campaigning for Britain to have an elected head of state, condemned the arrests.

“Free speech is fundamental to any democracy. At a time when the media is saturated with fawning over a king appointed without discussion or consent, it is even more important,” the group said.

Censorship appears to have extended to media content as well. Segments of comedian John Oliver’s show on HBO, Last Week Tonight, were edited out by Sky for the U.K. broadcast, as per reports.

The Queen’s coffin left  Scotland – a part of the U.K. that was loved by her – on Tuesday evening. The route of the journey from St. Giles Cathedral to the airport was lined by mourners, some taking photographs, clapping, some with bowed heads and others standing silently.

Scotland’s First Minister, Nicola Sturgeon, was present at the airport to see the C-17 Globemaster aircraft off. The coffin was accompanied on the flight to London by the Queen’s daughter, Princess Anne and her husband, Timothy Laurence.

The Royal Air Force plane carrying the coffin of Queen Elizabeth II arrived in London late on Tuesday night. The body will be brought to Buckingham Palace – the Queen’s home in the capital city. From there, on Wednesday afternoon, the coffin will be taken to Westminster Hall, a 900-year-old hall in the UK parliament complex, where the Queen will lie in state until the funeral on Monday, which world leaders are expected to attend.

(With inputs from AP)