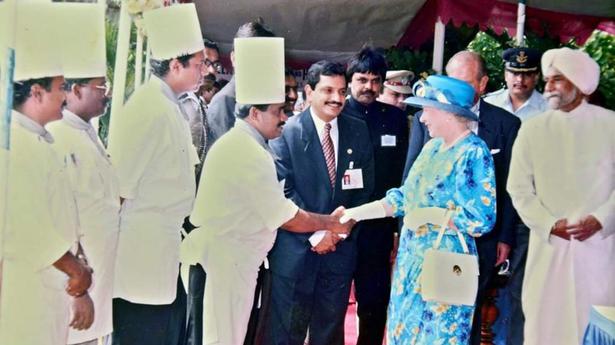 She visited India thrice, and in 1997, made a brief visit to Kochi along with her husband

She visited India thrice, and in 1997, made a brief visit to Kochi along with her husband

“What she found tasty and interesting was the drumstick thoran. A stir fry made with drumstick flesh and flowers; it was one of the Kerala dishes we had chosen for the menu. She also enjoyed the fish moily,” recalls retired chef K.K. Nair who oversaw the menu and its preparation for the high-profile visit of Queen Elizabeth 11 when she visited Kochi in 1997.

The longest-serving monarch of the United Kingdom, the Queen of England passed away on Thursday at the age of 96. She visited India thrice, and in 1997, made a brief visit to Kochi along with her husband, Prince Philip, the Duke of Edinburgh.

Former Mayor of Kochi K.J. Sohan who was with her during the visit to Fort Kochi says that among the historic places like the St. Francis Church and the Paradesi Synagogue in Jew Town, she visited the Mini Colony in Fort Kochi, a project funded by the British DFID (Department for International Development) in collaboration with Cochin Corporation’s Urban Poverty Alleviation Scheme to build houses for the fishermen who lived along the coast. A plaque mentioning the visit exists.

It is understood that her visit to Kochi was planned from her keen desire to visit the centuries-old Jewish settlement in Kochi. She reportedly conveyed her excitement about the blue and white Chinese tiles of the synagogue to her sister, Princess Margaret.

The Queen was also escorted by Kenneth Lawrence Bandey, an Englishman, who, after retirement from William Goodacre and Sons in Alappuzha made Kochi his home and lived at the Cochin Club until his death.

Along with her visit to historic places like the St. Francis Church and the Paradesi Synagogue in Jew Town, Queen Elizabeth visited the Mini Colony in Fort Kochi.

A lunch hosted for her by the Governor of Kerala, Sukhdev Singh Kang was attended by important personalities of Kerala.

Philip Mathew, Editor, Malayala Manorama, recalls the meeting of his mother Annamma Mathew with the Queen.

“My mother was introduced to her as the founder of the women’s magazine, Vanitha. For their photograph, she asked the photographer to give her a minute to adjust her hat. She took her time to get the right slant and posed regally,” says Mr. Mathew. Prince Philip inaugurated the Internet department at the office of the Malayalam newspaper.

Chef Nair adds that Prince Philip was jovial and enjoyed the lunch as much as the Queen.