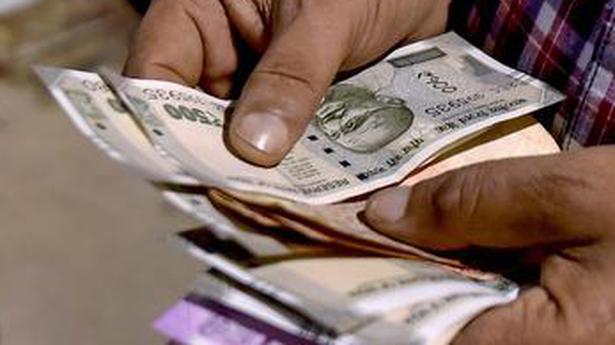 At the interbank foreign exchange market, the rupee opened at 79.66 against the greenback

At the interbank foreign exchange market, the rupee opened at 79.66 against the greenback

The rupee depreciated by 10 paise to 79.67 against the U.S. dollar in opening trade on Monday, even as the equity market opened on a positive note.

At the interbank foreign exchange market, the rupee opened at 79.66 against the greenback, then fell to 79.67, registering a decline of 10 paise over its last close. In initial deals, the local unit also touched 79.64 against the dollar.

On Friday, the rupee appreciated by 12 paise to close at 79.57 against the American currency.

Meanwhile, the dollar index, which gauges the greenback’s strength against a basket of six currencies, fell 0.23% to 108.75.

“Markets now await India’s August inflation data, which is likely to trend higher to 6.90 per cent from 6.71 per cent in July, as per a poll, adding pressure on RBI to hike interest rates more aggressively in coming months,” said Sriram Iyer, Senior Research Analyst at Reliance Securities.

Foreign institutional investors were net buyers in the capital market on Friday as they purchased shares worth ₹2,132.42 crore, as per exchange data.