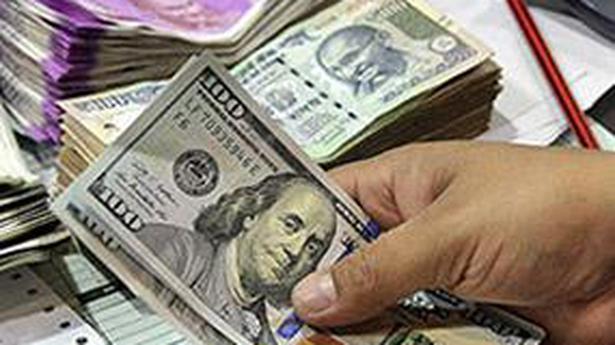 On Monday, the rupee rose 4 paise to close at 79.53 against the American currency

On Monday, the rupee rose 4 paise to close at 79.53 against the American currency

The rupee appreciated 28 paise to 79.25 against the U.S. dollar in opening trade on Tuesday, tracking the dollar’s decline versus its major peers and foreign fund inflows.

At the interbank foreign exchange, the domestic unit opened at 79.30 against the dollar, then touched 79.25 in initial deals, registering a gain of 28 paise over its previous close.

On Monday, the rupee rose 4 paise to close at 79.53 against the American currency.

The dollar index, which gauges the greenback’s strength against a basket of six currencies, fell 0.12% to 108.20.

Foreign Institutional Investors (FIIs) were net buyers in the capital markets, as they purchased shares worth ₹2,049.65 crore on Monday, according to provisional data.

On the domestic macroeconomic front, retail inflation accelerated to 7% in August driven by high food and fuel costs, while factory output plunged to a four-month low of 2.4%.

The finance ministry on Monday attributed the rise in inflation to base effect and increase in food and fuel prices, and stressed that initiatives taken by the government to curb price rise will be felt more significantly in the coming months.