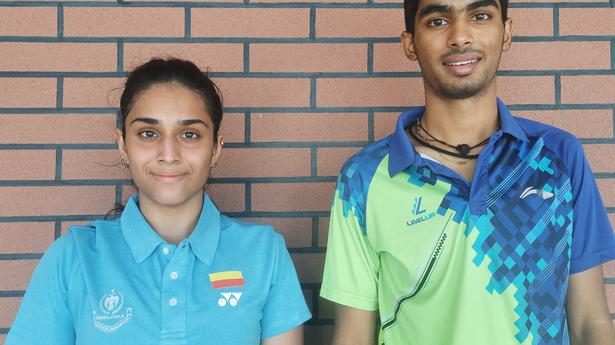 
Every time she was pushed to a corner, Drithi Yatheesh flinched. Her movement was not fluid and as her Karnataka compatriot Rujula Ramu tried to move her around, in the women’s final of the Yonex Sunrise South Zone badminton championships at the St. Peter’s Sports Academy here on Thursday, Drithi appeared to be in some pain.

But despite the discomfort, Drithi was too good for Rujula — an opponent she had lost to in the State championships. She came up with some effective cross-court smashes and drops and kept Rujula, who had packed off the top-seeded Shravya Dande in the quarterfinals, guessing all through and won 21-15, 21-13.

“I had blisters under one foot and every time I pressed that leg, it pained,” Drithi, coached by former international Arvind Bhat in Bengaluru’s Level Up Academy, told The Hindu after her victory.

Karnataka walked away with three of the four singles titles. D.S. Saneeth took the men’s trophy after his opponent Ayush Shetty retired midway through the second set with cramps. That also stopped Ayush from playing the under-19 boys final and Tushar Suveer won without entering the court.

Former Commonwealth Games medallist George Thomas was the chief guest and was among those who gave away the prizes.