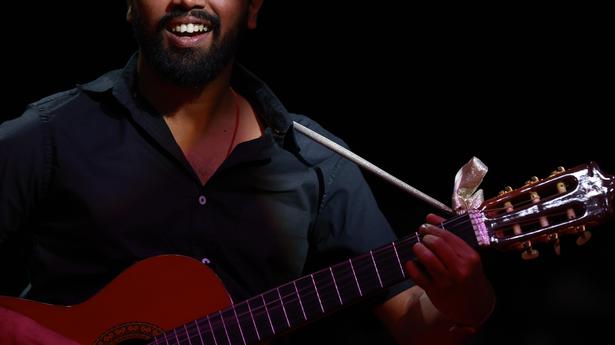 Music that is all encompassing: one moment, it is resonant of green paddy fields; at another, it trembles like desert winds. This is what singer and composer Pradeep Kumar’s ‘Pann’ sounds like. To create the 30-minute piece, he has tapped into the sounds of five Tamil landscapes such as kurinji (mountains), mullai (forests), marutham (agricultural lands), neithal (seashore) and paalai (dry lands), and added a bit of futuristic touch. The singer, along with a team of over 40 musicians, has created what he terms the “world’s first programmable NTF on such a scale”.

The seed for ‘Pann’ was sown during the lockdowns. “With no performances for two years, I was forced to be at home. That is when I thought, how does one create a viable economy for musicians? There are lakhs of them in Tamil Nadu alone, like nadhaswaram and tavil players especially who were majorly affected,” he says. Pradeep’s search took him to blockchain technology, realising “it was very fundamental to art, be it a performance or painting”.

To him, the best thing about “using such magnificent digital strength”, is that an artiste is able to “create provenance for their art work”. He explains: “We are able to say that I created this work. We are able to prove that we are its creator.” For him, this was ground-breaking. This technology, that used an alternative economic system — that is crypto economy — drew him, and Pradeep started exploring the world of NFTs.

Around this time, Metapurse, a company that collects NFTs, that bought the popular digital art Everydays: The First 5000 Days by Beeple, commissioned a project for him. “They wanted an ambient music track for the first ever NFT art exhibition in New York,” he says, adding, “That is when I thought, why not create an NFT for this.” He got in touch with Async Art platform that lets people create programmable art, and decided to make “programmable music”.

The 36-year-old got to work on a long piece for an event that was taking off on new technology. Instead of seeking the new, he travelled into the past. “I wanted an old Tamil name for the piece,” he says. He picked this with a lot of thought, for it was “going to be India’s first programmable NFT, probably the world’s first NFT with so many variations and 42 artists collaborating.”

‘Pann’, says Pradeep Kumar, gave a lot meaning to him as it unfolded. It is basically a musical composition that one can listen to in different combinations. “Creating programmable music pushed my creativity. I had to think of different variations: what would happen if instead of voice, a choir appeared? What if here, instead of mridangam, drums took over?”. The composition alone took him two months, followed by another month of mixing.

Pradeep says that his piece has 19,440 variations. “So far, 500 different variations have been played,” he explains. “People can record any of the variations they like and it becomes their own NFT.” He released the song on Async as layers that people an collect. “Those who collect the layers, can change the master,“ he explains.

Apart from owning the song’s layers, the audience can own the master track as well. “But this is a dynamic master: consider it an art work on a wall with speakers playing music by it. Today, you will see one version, tomorrow you will see another one. It is magical how every day, it can evolve into a new thing. But it will still hold its spirit.”

Pradeep agrees that people will take time to understand ‘Pann’. “But it is not necessary for it to be understood. It is ultimately music.” He adds: “I really don’t know how the 19,400 variations will sound. But I have created a skeleton, within which it will evolve. In a way, I have liberated myself from it.”

On the film front

Pradeep Kumar has produced an independent feature film titled Nalla Perai Vaanga Vendum Pillaigale. “We are planning on its theatrical release soon,” he says. Prasad Ramar, the scriptwriter of Pizza, who directed Enakkul Oruvan, a remake of the 2013 Kannada film  Lucia, has worked on it. “It is a coming-of-age road movie with a social context that is very real, at the same time light-hearted.”