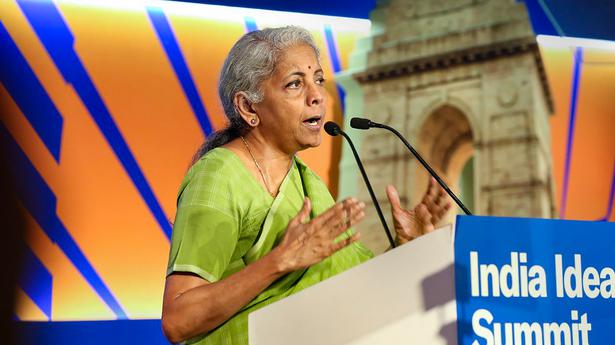 “If you attribute States’ inflation to the Centre, then we need a way for Centre-States’ co-operation to handle price rise”

“If you attribute States’ inflation to the Centre, then we need a way for Centre-States’ co-operation to handle price rise”

Emphasising that it was unfair to blame the Centre for some States’ higher price levels, Finance Minister Nirmala Sitharaman said on Thursday that States that have not cut fuel taxes are recording inflation rates higher than the national average and mooted a Centre-State co-operation mechanism to handle price rise matters.

While the Centre had cut petroleum taxes for consumers recently on two occasions in view of surging global prices, Ms. Sitharaman pointed out that several States had not offered any relief to their residents who were suffering because of this.

“Very recently, widely-available information in the public domain shows how inflation has varied from State to State. There could be several reasons for it. But the fact remains, and I find, coincidentally, and I am being careful here…Coincidentally, inflation being higher than the national level inflation in States which have not reduced the fuel prices,” Ms. Sitharaman said.

“You might think I am stating the obvious. But it establishes the fact that the movement of foodgrains and food-related items actually have a bearing on the price of these items, which account for a bulk of the Consumer Price Index (CPI),” Ms. Sitharaman pointed out.

While headline inflation has averaged 6.8% since January 2022, 14 States as well as three UTs, including Jammu and Kashmir (J&K), have faced higher than the national inflation, most of them averaging over 7%, as per an analysis of States’ inflation trends by The Hindu.

“The inflation that prevails in different parts of the country, despite the GST and despite creation of one market and despite removing the toll taxes and freeing movement of goods, vary from State to State,” Ms. Sitharaman said, adding that this makes India’s inflation experience different from many other countries.

“Now if States and their inflation will also have to be attributed to the Government of India, then we will have to have a way in which we work together to handle inflationary matters with Centre and State co-operation,” she asserted at an ICRIER conference on ‘Taming Inflation’.

Drawing an analogy with the debate over the devolution of taxable revenues where some States argue that they get an unfair share of revenues compared to what they contribute to the economy, Ms. Sitharaman said a similar approach is needed to evaluate States’ handling of inflation.

“It cannot be that inflation is handled only by the Centre, and when States don’t take enough steps, that part of India suffers for want of a release from the stress of inflation… there are enough justification to have an understanding of how States manage handling their inflation,” Ms. Sitharaman underlined.

Ms. Sitharaman prefaced her remarks by stating: “Now, I am not doing politics here, but I will bring in an element where you will suspect I am doing politics. But it has definite relevance for people studying inflation.”

“At a time when global fuel prices went up, you wanted to be sure that the burden is not passed on to the end-consumer. Where it was possible, and how much ever was possible, the government twice reduced the price of petroleum products to the extent it could be done,” Ms. Sitharaman recalled.