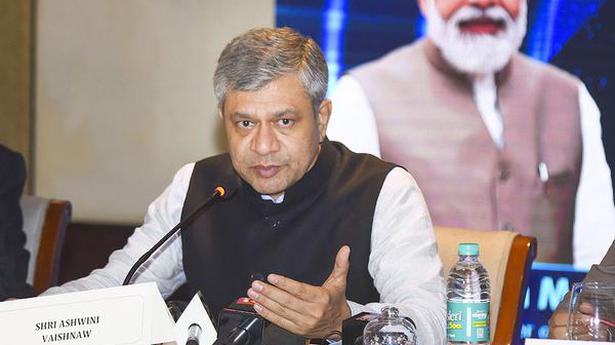 
Telecom Minister Ashwini Vaishnaw on Wednesday assured the sector of more reforms in the offing but asserted that the industry too would have to do its bit and reciprocate by improving service quality “significantly”.

He indicated that service quality parameters would be significantly increased and that the Telecom Department would approach the Telecom Regulatory Authority of India (TRAI) in this regard.

“I will be requesting Department [Telecom Department] to send a new consultation paper to TRAI for significantly increasing the quality of service parameters almost making it 3x or 4x of what it is today,” Mr. Vaishnaw said at an event organised by the Digital Infrastructure Providers Association (DIPA).

The Minister exhorted the industry including telecom operators and infrastructure providers to move “full steam ahead” on improving quality of services in the country, now that a slew of reforms had been announced and more were lined up.

The Minister said initiatives cannot be one-sided, and the equation has to be “reciprocal.”

“You can’t clap with only one hand, both hands are needed. It cannot be that just we keep doing what you ask. You also have to do what we ask,” he said.

The comment assumes significance as improvement in telecom service quality is bound to cheer mobile customers, irked by call drops and patchy networks.

The Minister promised that the journey of 5G would be “exciting” and noted that the government had given a target of 80% coverage in “a short timeframe” to the industry.

“While many countries took multiple years to reach 40-50% coverage, we are targeting a very aggressive timeline. We should definitely cover at least 80% in a very short timeframe,” Mr. Vaishnaw said.

He said that the industry would revert with its internal workings on coverage targets and timelines “very soon”.

“Hopefully, we should be able to make a difference in common citizens’ life by providing good high quality digital services,” he said.

The Minister assured that the government’s approach would be that of a partner to the industry. As it is, the government has moved swiftly on ironing out industry issues and simplifying processes. He mentioned upcoming initiatives on legal backing for Right of Way and licensing reforms.

At the same time, he made it amply clear that that while the government had introduced a wave of major reforms in the sector in the past too, telecom service providers and infrastructure players now needed to focus and prioritise quality of service at their end.

“Now that we have given so much by way of reforms, the telecom service providers should increase their quality of service significantly,” he emphasised.