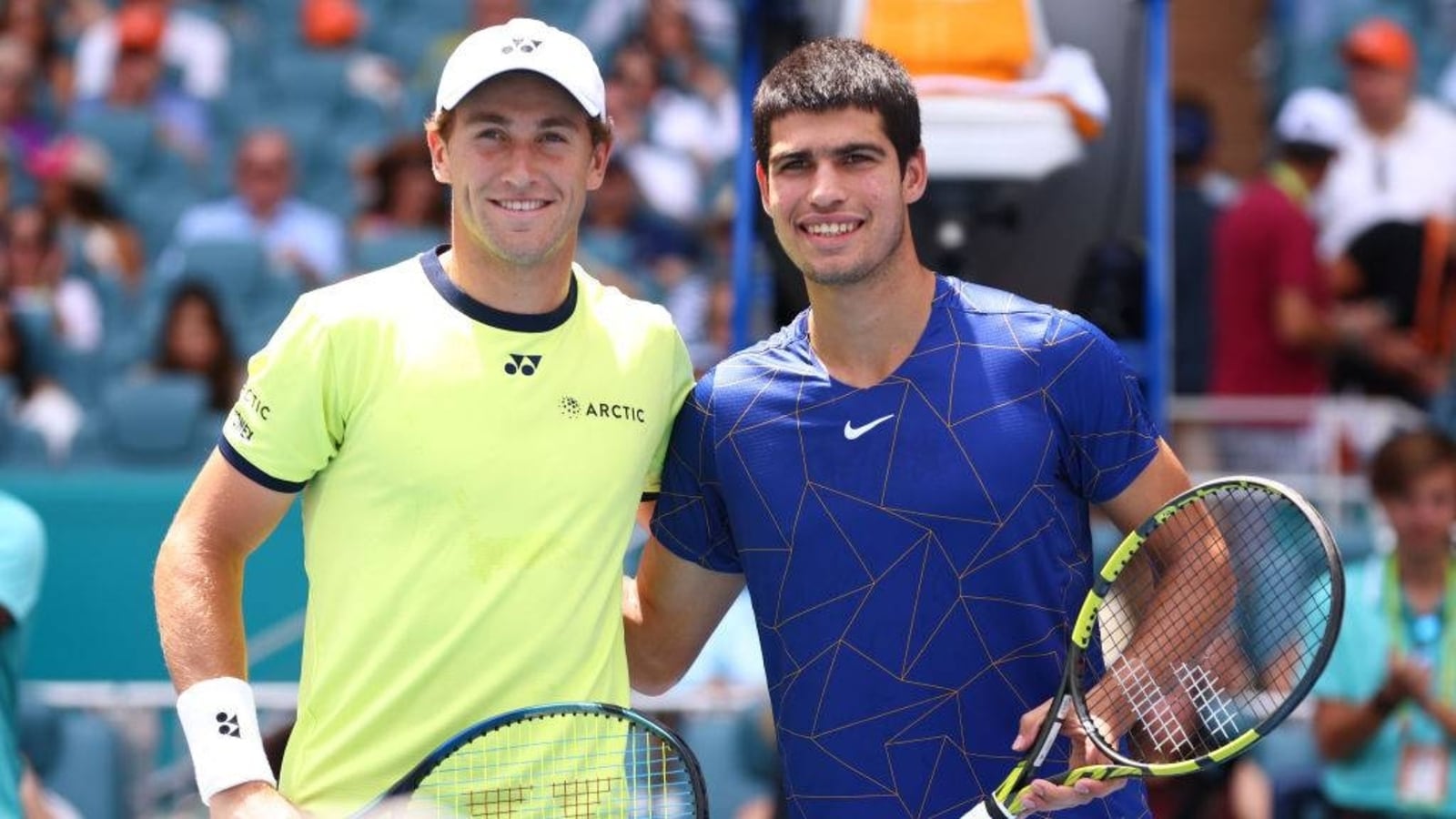 
Amid all the talk around women’s singles draw, the unpredictability factor of the men’s draw held in the second week went unnoticed. With Rafael Nadal and Daniil Medvedev’s exit in the round of 16, the men’s draw had all eight quarterfinalists chasing their maiden Grand Slam title and the four that went through to the penultimate stage of the tournament had never ventured that far in US Open ever. Eventually, it narrowed down to two young guns – Carlos Alcaraz and Casper Ruud – who have never been part of a match with so much at stake. The two will not just be aiming for their respective maiden Slam in New York, but the winner of the final Slam in 2022 will take home the world no.1 ranking as well.

Alcaraz has the edge in the head-to-head rivalry having won both the matches against the Norwegian, the latest being in the Miami Open final earlier this year where Ruud had conceded a 4-1 lead in the opening set to go down in straight sets to the 19-year-old. Revenge would hence be on Ruud’s mind, who does have the experience of playing at a Grand Slam final, having met the legendary Rafael Nadal at the French Open final earlier in June.

Ahead of the blockbuster meeting on Arthur Ashe between Alcaraz and Ruud, we take a tactical dive into the factors that could decide the final…

Ruud has to serve well

“Unfortunately I was too low on the first-serve percentage,” Ruud had said after his 5-7 4-6 loss to Alcaraz in Miami Open final. “That’s dangerous against Alcaraz, because he returns well both first and second serves. But on the second serves, he stays very, very aggressive and makes a lot of good returns.”

Ruud has been top-notch with his service games in this US Open. He has been getting 78 per cent win behind his first serves and has also won 88 per cent of his service games, which stands only behind Nick Kyrgios (90%) among all eight quarterfinalists at the US Open in men’s singles. Alcaraz has shown signs of struggles winning points on first serves of his opponents, claiming only 35 per cent win, albeit less than Ruud (31%).

One of the reason behind Ruud’s run to the final has been his outrageous numbers while defending. In a metric used by US Open, Steal Score (how often a player has won the point when defending), Ruud tops the chart with 41 per cent win compared to Alcaraz’s 39.3. The Spaniard has recorded better figures in his last two matches than Ruud’s tournament average – 41 per cent in quarterfinal and 44 per cent in semis.

In the final, against a player with incredible court coverage, or in Ruud’s words, a player who “can bring up unbelievable points and rallies,” the Norwegian just can’t rely on defense and hope Alcaraz commits an error. He needs to step up and attack more and control the match from the baseline, where he has won 56 per cent of the rallies in this US Open.

In their previous meeting, Alcaraz had gone aggressive with the serve-and-volley tactic – the perfect antidote against a deep returner – had reduced the rally lengths and pushed Ruud back with his forehand before dishing out the drop shots in the most disguised fashion. Where Ruud lacked was he failed to up his offense when needed against an attacking player of Alcaraz’s ability while the Spaniard was able to defend well when required.