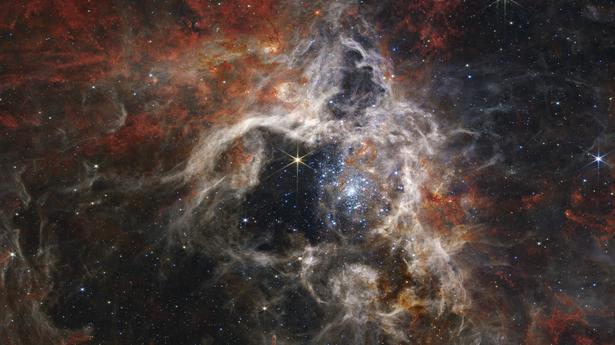 NASA’s James Webb telescope has been able to peer deeper into a dusty nebula that hosts a cluster of newly forming stars. The stunning image of the Tarantula Nebula shows thousands of young stars in greater clarity than ever seen before.

NASA’s James Webb telescope has been able to peer deeper into a dusty nebula that hosts a cluster of newly forming stars. The stunning image of the Tarantula Nebula shows thousands of young stars in greater clarity than ever seen before.

The Tarantula Nebula— or the 30 Doradus— is a stellar nursery situated in the Large Magellanic Cloud galaxy 1,61,000 light years away. Stretching across 340 light years, the nebula is the largest and the brightest star-forming region in the Local group that includes our galaxy, the Milky Way.

Named for its filaments of dust that looked like spider silk in previous images, the Tarantula Nebula was viewed by the Webb telescope through different instruments to glean a clearer picture of the heart of the nebula.

Images viewed by the Near-Infrared Camera (NIRCam) show a cavity that has been hollowed out by the radiation emitted by a cluster of young stars. This area sparkles a pale blue in the image. The powerful winds emitted by the young stars have blown away all but densest areas of the nebula, giving it the appearance of a burrowing tarantula’s home.

The densest part of the nebula form pillars of dust and gives birth to massive protostars.

A Near-Infrared Spectrograph (NIRSpec) has captured images of a star in its earlier days. Previously thought to be an older star, Webb’s powerful instruments show the star beginning to “emerge from its pillar” while still having an insulating cloud of dust around in itself, a press release by NASA said.

Using its complex instruments, Webb has also been able to capture distant galaxies in the background, as well as the nebula’s structure and composition.

Also Read: No Gamma rays from a dwarf galaxy solve an astronomical puzzle

The Tarantula Nebula piques scientists’ interest as it has a similar chemical composition to that of giant star-forming regions found during the peak of star formation. Studying a nebula that is close enough be observed gives scientists an opportunity to know more about the ‘cosmic noon’— when the universe was only a few billion years old and producing stars at a rapid pace.

The stunning image of the Tarantula Nebula is the latest among a slew of images captured by the James Webb Telescope. The first images released by NASA on July 12, 2022 showed vibrant glimpses of the Carina Nebula, Stephan’s Quintet, Southern Ring Nebula, exoplanet WASP 96-B and a cluster of galaxies named SMACS-0723.