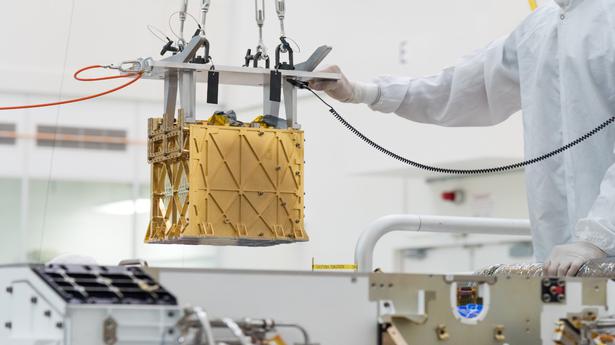 The Hindu’s weekly Science for All newsletter explains all things Science, without the jargon.

The Hindu’s weekly Science for All newsletter explains all things Science, without the jargon.

(This article forms a part of the Science for All newsletter that takes the jargon out of science and puts the fun in! Subscribe now!)

The Mars Oxygen In-Situ Resource Utilization Experiment, or MOXIE, was launched as part of NASA’s Perseverance rover mission and has been successfully making oxygen from the planet’s carbon-dioxide-rich atmosphere since it landed there in February 2021.

MOXIE was able to produce oxygen on seven experimental runs, in a variety of atmospheric conditions, including during the day and night, and through different Martian seasons. In each run, the instrument reached its target of producing six grams of oxygen per hour — about the rate of an average tree on Earth.

The big picture is that a scaled-up version of MOXIE could be sent to Mars ahead of a human mission, to continuously produce oxygen at the rate of several hundred trees. At that capacity, the system should generate enough oxygen to both sustain humans once they arrive, and fuel a rocket for returning astronauts back to Earth.

MOXIE’s oxygen production on Mars also demonstrates success in being able to harvest and using a planet’s materials (in this case, carbon dioxide on Mars) to make resources (such as oxygen) that would otherwise have to be transported from Earth.

MOXIE works by first drawing the Martian air in through a filter that cleans it of contaminants. The air is then pressurized, and sent through the Solid OXide Electrolyzer (SOXE) that electrochemically splits the carbon dioxide-rich air into oxygen ions and carbon monoxide.

The oxygen ions are then isolated and recombined to form breathable, molecular oxygen, or O 2, which MOXIE then measures for quantity and purity before releasing it harmlessly back into the air, along with carbon monoxide and other atmospheric gases.

From the Science pages

Factors to consider when migrating individuals for conservation efforts

Has science evolved to record dreams?

Can diamonds be found in plenty deep inside the Earth?  Find out the answer here