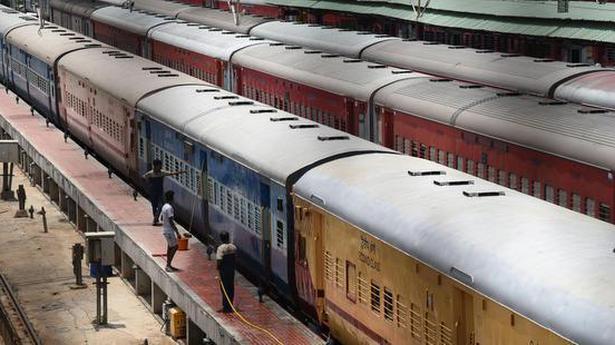 It is expected to generate direct employment for 30,000 people and 90,000 indirect jobs

It is expected to generate direct employment for 30,000 people and 90,000 indirect jobs

The Indian Railways expects incremental revenues of at least ₹30,000 crore per annum from freight services post the development of 300 ‘Gati Shakti Cargo Terminals’ over the next five years — as approved by the Cabinet on Wednesday, a senior Railways official said.

The Union Cabinet, chaired by Prime Minister Narendra Modi, on Wednesday ratified the policy on long-term leasing of the Railways land, while also approving plans to develop the 300 `Gati Shakti Cargo Terminals’ over the next five years. The setting up of these terminals is expected to generate direct employment for 30,000 people and 90,000 indirect jobs.

“We will start getting incremental freight revenues as the terminals are being developed in the next five years… Once all 300 are developed, the Railways will get additional revenues of at least ₹30,000 crore. This estimate is very conservative,” the official said.

Meanwhile, briefing reporters on the cabinet decisions, Union Minister Ashwini Vaishnaw on Thursday said, post the launch of ‘Gati Shakti Multi-Modal Cargo Terminal (GCT)’ policy in December last year, the government had received a very good response from the industry. “The target of 300 terminals is a very achievable target. We already have 150 firm proposals — about 93 applications have been received to build terminals and about 65 entities have expressed their interest,” the minister said.

He also clarified that there would be no change in the policy for the existing terminal holders, including PSUs such as CONCUR, Food Corporation of India, COAL India Ltd and Steel Authority of India. He said, “For all PSUs, there was already a 30-year lease policy and we have consciously made a decision that we will not be changing the terms and conditions for the existing cargo terminals. We don’t want any favourable or unfavourable treatment. The new players will come through a transparent bidding process.”

He, however, added that once the lease ended, the existing players would have the option to switch to the new policy via the bidding process.

The Minister also stressed that the role of the Railways was crucial to bring down the logistics cost of the country, which would help make India a more competitive market.

Mr. Vaishnaw added that after decades of losing market share in logistics, last year the Railways had begun to gain market shares and once the 300 terminals were made, the Railways would get more cargo.