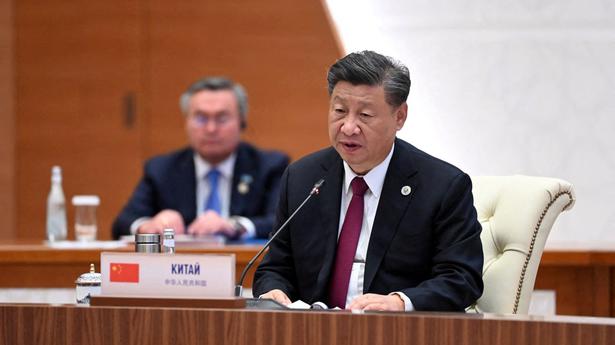 China’s President Xi Jinping on Friday called on members of the Shanghai Cooperation Organisation (SCO) grouping, which includes India and Russia, to “guard against attempts by external forces” to instigate “colour revolutions” or interfere in their affairs, in a veiled criticism of the West.

Addressing the SCO summit in Samarkand, Mr. Xi hit out at “obsession with forming a small circle” — the U.S., India, Australia, Japan Quad is among groups labelled as such by Beijing — and called on the SCO group to work together to make a more just international order.

The Chinese President also offered to train 2,000 security personnel from SCO countries and host a China-SCO base for training counterterrorism personnel.

Mr. Xi’s remarks did not directly mention the West, but underlined how both Beijing and Moscow see the SCO as a key vehicle to push back against western countries.

“The world today is not a peaceful place,” he said. “Rivalry between two sets of policy choices — unity or division, cooperation or confrontation — is getting more acute…. The SCO should seize the opportunity and step up its work to expand the ranks of cooperation and augment the effective force for international equity and justice.”

He said that “obsession with forming a small circle can only push the world toward division and confrontation” and the SCO members “should remain firm in safeguarding the UN-centred international system and the international order based on international law, practice the common values of humanity and reject zero-sum game and bloc politics.”

“We should guard against attempts by external forces to instigate ‘colour revolution’, jointly oppose interference in other countries’ internal affairs under any pretext, and hold our future firmly in our own hands,” the Chinese leader said.

He said China was ready to train 2,000 law enforcement personnel for SCO member states in the next five years and establish a China-SCO base for training counter-terrorism personnel.

On the economic front, Mr. Xi said China would provide developing countries humanitarian assistance in grain and other supplies worth 1.5 billion RMB ($105 million). He also called for implementing the roadmap for SCO member states to expand shares of local currency settlement as well as set up an SCO Development Bank, which would likely follow the examples of the BRICS New Development Bank and the Asian Infrastructure Investment Bank (AIIB), which are headquartered in Shanghai and Beijing respectively.

Meeting with Russia’s Vladimir Putin on Thursday, Mr. Xi said China would “work with Russia to fulfil their responsibilities as major countries and play a leading role in injecting stability into a world of change and disorder.” He also extended “strong mutual support on issues concerning each other’s core interests”.

Mr. Xi, who also attended a China-Russia-Mongolia trilateral and several other bilateral meetings on the sidelines of the SCO, announced Beijing would push for the early operation of a China-Kyrgyzstan-Uzbekistan (CKU) railway project.